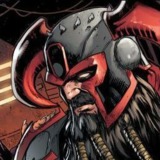 Resistance would be pointless...but don't let that stop you. 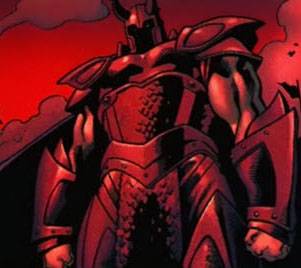 Given name: The Inevitable

As a Delossian, Zedracus is considerably stronger than a human, and his military discipline keeps him in top physical form, allowing him to lift in excess of 1,000 lbs over his head. His musculature is not subject to atrophy in low-gravity environments, and he is resistant to most forms of radiation encountered in space travel.

Additionally, he has been subjected to a highly secretive process that combined the highest levels of both magic and science in the Abyssal Imperium. This process had never been successfully performed on any living creature, but Zedracus' immense strength and resilience, coupled with his burning rage and will to survive, allowed him to survive having his own body fused with the concentrated energy of a red dwarf star. He can harness this energy at will, using it to fire bolts of radioactive fire that reach 4,000 K. in heat. He can also transmit this devastating radiation through touch, and even infuse weapons with it (provided that said weapon can itself withstand the heat).

Zedracus was born into a noble family of Delos. Arrogant and temperamental by nature, no one ever seemed to live up to his expectations, and he was never satisfied with the amount of power and influence that both his family's standing and his own prowess as a warrior were able to earn him. Looking beyond Delos for an alternative means of gaining power, he managed to come into contact with the Abyssal Imperium. In exchange for a prominent position in the Imperium (he was given the title of the Inevitable, a symbol of the futility of defying the Imperium, and made one of the high commanders, answerable only to Nordok himself), he revealed the location of his homeworld to his new-found allies. If he feels any guilt or regret that his betrayal resulted in the annihilation of Delos, he has never demonstrated it.

Combat: as part of the warrior class of Delos, Zedracus has received extensive combat training. He is an accomplished hand-to-hand fighter and a skilled marksman. However, his preferred method of combat is in the use of bladed melee weapons, particularly swords, axes, and spears, as he feels that battering a foe with his fists is a bit brutish and primitive, and shooting a foe from a range rather cowardly.

Piloting: though he is not particularly expert in vehicle operation, Zedracus was trained to proficiently operate most manner of ground, water, air, and space vehicles found on Delos. He has taken the time to likewise familiarize himself with the control of most Imperium vehicles, though he usually leaves such tasks to others, finding vehicle operation in general to be somewhat beneath him.

Tactics: Zedracus prides himself on his military acumen; part of what motivated his betrayal of Delos was being passed over for appointment as the supreme commander of his planet's military forces for someone who was, in his opinion, an inferior candidate (despite the fact that said candidate was far more experienced, with a much longer record of distinguished service).

Weapons: Zedracus heavily favors melee weapons, and typically wades into combat wielding either a massive sword or axe (or both, if he is feeling especially enthusiastic). Both weapons are constructed of virtually indestructible adamantium, allowing him to use them to deliver blows infused with his own deadly energy, but otherwise possess no remarkable properties.

Armor: despite appearing somewhat archaic and ceremonial, Zedracus' armor is actually the apex of Imperium metallurgy. It is composed of an adamantium/duranium alloy, which makes it not only nearly impossible to damage, but also gives it a remarkable ability to absorb kinetic energy, which protects its wearer from the force of all but the most titanic of blows. Advanced nanoservos also give it the ability to massively increase the wearer's strength, and Zedracus is able to exert up to ten tons of force while wearing it.

The Severed Claw resembles one of the standard escort destroyers of the Imperium fleet. Retaining the destroyer's anti-fighter capacity, the Claw has a reinforced hull and greatly advanced shield generator, making it far more durable than the standard model. It also contains a prototype armament known as a supernova cannon: a weapon capable of scouring all life from the surface of a world while leaving the planet itself largely intact. Ordinarily, such a weapon would require far too much power for it to be fitted to such a small vessel, but this issue has been dealt with by having the weapon absorb energy from the target planet's own star to power itself. If a sufficient star is lacking, the Inevitable One can actually use the radiation of his own body to power the weapon, but this will leave him in a state of considerable physical depletion, and requiring significant rest to regain his usual potency.