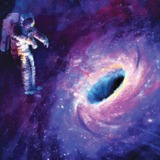 "Empathy comes with suffering. The less human I become, the more human I feel."

In the Quiet of the Moon

Pity and grief taxed Gwen's mind as she stared at the wreckage. The remains of a storage facility, primitive and wooden, were scattered before her. Few but various food items were left in the ruin, all familiar to cuisine found on Earth yet noticeably different. Torn apart by unknown yet familiar means, the edges of the remaining few walls were charred and ashes littered the floor. The corpse of a native was propped up against one of the walls, a hole in his chest and his flesh burnt black. On the wall adjacent his body a message had been carved.

'Sorry' was the only word left by the murderer. The message was written in English, a language not known to the inhabitants of this particular planet. It was much like an unspoken eulogy. The note wasn't written to apologize to the deceased, it was intended to sooth the still breathing criminal's mind. No one would gain comfort from it but her.

The electromagnetograph in Gwen's hands had a firm lock on the offender's position as it pointed skywards. Without a doubt, she was on this planet's moon. Gwen had known this for a while, but she was hesitant to see her old friend. Negative outcomes of their meeting replayed in her mind over and over until she decided to stop thinking and make the journey.

"What a beautiful spot you picked," Gwen thought as she flew to the crescent in the distance.

Upon the cold, still rock Gwen found a single living being. A young girl, blonde, was found sleeping on the cold rock. She wore a modest, blue dress that attested to her innocence. Gwen approached slowly, her anti-gravity fields active in the event of an unfortunate surprise. After floating withing a foot of the girl, she awoke.

Bolts of electricity leapt from the girl's body in all directions, arching into the lunar soil and cracking rock. The flowing electrons danced around Gwen's barriers and into the ground all around her. In the bright light, Gwen's vision was lost to her. In the void, her other mundane senses her equally useless. The young girl's form however, in stark contrast to the emptiness that surrounded her, was brilliantly clear. Her body was shaking, her stance unsure, and her face was full of fear.

After regaining her nerve, Gwen began to press forward towards the girl. She floated towards her, slowly and steadfast, until their faces were mere inches apart. The girl recognized Gwen and the flow of energy began to dwindle until the moon was once again silent. With a wave of her hand, Gwen stirred up a cloud of dust. Using the medium to carry her voice, she spoke:

"Hello, Emilia. How are you doing?"

Emilia kept her eyes to the ground and did not speak. Her right arm was draped in front of her and latched to the other to create a safe barrier between the two.

"Are you having fun out here all alone, living like this?" Gwen asked.

"Fun? Fyck you. Where am I supposed to go?" Emilia replied.

"I have a new home, Emilia. With people that care about me and accept me for who I am. It's not Earth, it's a different world. A place where you won't have to hide what you are." Gwen explained.

"No... you're trying to make the same promises that I've already heard before. We all grew corrupt. You all left me to fight Radriar alone. I'm sorry to disappoint you, and I wish you the best, but staying out here is the best hope I have for a happy future." Emilia argued.

"There's only one other, Emilia. Simon is dead. I killed him... I'm not asking you to join me or commit to anything, just come with me. Try to have a life again. Try to be happy. If you like it there and find that you want me gone, I'll leave. If you simply find that you don't want to stay, then I won't try to stop you from leaving."

Emilia's eyes met Gwen's for the first time in their entire conversation. Gwen offered Emilia her hand. A final attempt at repairing something that had been broken so long ago.

Blogs Created:
3 blogs
Most Commented blog:
In the Quiet of the Moon
Total Comments on blogs:
10 comments