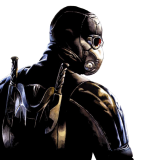 So you're walking home in the city at night when three local tough guys appear from nowhere and order you to give them your wallet. You don't see another choice, you give it to them, but one of them gets the idea to beat you up anyway. That's when a guy wearing blue pyjamas and his red underwear on the outside jumps down from the rooftop and beats them up. You thank him but no matter how thankful you are, you need to try really hard not to laugh at him when he pats you on the shoulder with a heroic smile and climbs back on the roof. Whatever people say, it's important how heroes look. No matter how amazing powers you have, people gonna laugh at you if you start swinging above the street without your pants.

So the question is, why should the reception of such appearence be different just because it's written in a comic book and not in a regular book, movie, or even happen in real life. Is it a tradition that can't be changed, no matter how lame it is? In Action Comics #1 it had to be shown how strong Superman really is, and the artist chose the simplest form of that: lifting heavy things and showing big muscles. (I still don't understand red underwear on the outside though, maybe to make his parts look bigger, or just so he can give it to victims who had too much stress and needed an extra pair.)
After Superman's success it was obvious that publishers can easily achieve similar success with similar heroes. From then it's pure business: we have a successful character, let's not change anything we don't absolutely have to, or who knows what happens. Looks like later it started to look like it wasn't such a great idea, because although writers didn't dare change the appearence which became iconic by then, they started making excuses for it. The most common excuse is that spandex is more comfortable to wear under regular clothes than an armor or even a normal custome, and this way heroes don't have to waste time on changing clothes. But is it really that comfortable to wear a cape under your shirt in the office? And how much time would a guy faster than a speeding bullet have to "waste" on changing? Also, if the sleeve of your shirt slips up, you're busted instantly, suddenly everyone knows your secret identity. This doesn't explain either why heroes with no secret identities wear thights instead of normal clothes or costumes. There are other more forced excuses made by writers who have a bad feeling about their heroes wearing pyjamas, but don't have the guts to change it, even in a different universe: in Mark Millar's Ultimate X-men (otherwise one of my favourite writers) mutants wear black latex because it hides their mutant gene from sentinels.

In the past years with the flood of superhero-movies, it became obvious that superheroes with their current appearance are not sellable to normal cinema goers of the 21st century. In the movies and luckily even in some comic books heroes get a new look while also keeping their iconic colors and symbols. In Garth Ennis's Punisher the mean vietnam veteran turned vigilante doesn't wear latex anymore (I can't believe someone thought he should do that in the first place). Christopher Nolan also preferred a black armor for Batman while also making him look more bat-like than he does in his light grey thights with blue silk underwear on the outside.  Obviously nobody will accuse this guy of being a gay pedophile.
I think writers and artists finally start to realize that wearing your underwear on the outside is not cool in the 21st century.
Start the Conversation