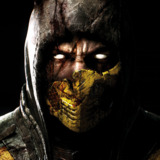 Unlike the rest of his family, Leon was not gifted powers by the Lazarus Pit. Instead, he was given a long life at the cost of being permanently crippled his bone structure crumbling. Rather than face death, however, he sought his enhancements through cybernetic implants, which have re-built him to have physical attributes far beyond even Olympic athletes. Able to lift cars, run over 35 miles per hour, leap small buildings, and dodge bullets with relative ease, he has become a new man via robotics, though his bitterness remains. His general attitude towards the world is bleak, as he had to create his own artificial life after the world had tried to take his form him. Having concluded that life is random and cruel with no prejudice, he has taken up mercenary work, eliminating evil for free, and otherwise for a price.

Exo-Suit: Leon wears a strengthened titanium-alloy exo-skeleton on his back which is implanted into his spine, linking with his nervous system and allowing him to move it as if it were a part of his organic body. This exo-suit provides him with even greater enhanced physicals than what he was granted by his exposure to the Lazarus Pit, allowing him superhuman feats of strength, speed, and agility unmatched by even the greatest of humans. This exo-skeleton has built-in med-injectors, which give Leon varying doses of painkillers upon detecting an injury. The suit also contains thrusters in the legs and arms, which allows for a rocket-propelled strike, or a quick getaway. These thrusters can only be used for seconds at a time, however, simply providing a quick boost. This exo-suit also has built-in grenade launchers on the forearms, activated via neural command, as with the other functions on the suit. These grenades can be selected via a neural interface menu, and can vary between simply frag, tracker, cluster, clincher (a plastic explosive mounted on a metal claw which clamps down upon contact with another surface), harpoon (with retractable wire attached), and homing.

Armor: Below his exo-suit, Leon makes heavy use of Kevlar armors on his chest, upper arms, forearms, and legs, the joints being covered by light but effective elbow and knee guards, integrated into the exo-suit, with titanium-alloy blades extendable and retractable upon neural command.

Sword: A favorite weapon of Leon's. He possesses a modernized katana, being informal and shape and design. It is a straight-edged titanium-alloy blade, with electro-shock capabilities and small pistols built into the sides of the blade. Leon never leaves home without his sword.

Munitions: Leon is known to carry a variety of different weapons, depending on the job. This includes Assault Rifles (with ammo selectors, able to choose between airburst, tracker, heavy explosive, armor piercing, and EMP), Pistols, Rocket Launchers (With the same ammo-types as his forearm-mounted launchers, but with greater power and range), and hand-held grenades of the same variety as his wrist-launchers, which can be used to re-load said launchers, or as a separate weapon.

Drug Influence: Like his cousin, Fox's powers stem from the use of illicit substances. However, unlike his brother, these powers come exclusively through the use of heroin. Heroin does not give Fox a high or affect him in the way it normally would, but other substances work as they are supposed to. Due to his not knowing of this, he has become addicted to Methamphetamine. He had built into his suit injectors that will give him a pre-determined dose of Heroin with the push of a button.

Swordsmanship: With a combination or natural talent and relentless training, Fox has become quite skilled with a blade. He prefers swords of Japanese design, feeling more comfortable wielding a blade of that shape than others, but can use nearly any bladed weapon well for offensive purposes. This skill is not just limited to his skill with a blade, however, as Fox is adept in Hapkido, as well as an extremely stylized form of street fighting.

Wings: Fox's wings differ from his brother's in that they more closely resemble those of a bat. These can fold down to be nearly unnoticeable under clothing, and allow him flight in a variety of speeds and heights, giving him contention with high-class military jets. His suit has built-in shutters in the back, which open upon command, allowing him to fold and extend his wings freely while wearing his suit.

Enhanced Agility: Fox is more agile than even the most talented of Olympic athletes, able to jump further, run faster, and generally move more gracefully than an un-augmented human, capable of performing great feats when necessary.

Enhanced Durability: Fox is more durable than an average human as well, able to survive massive amounts of blunt-force trauma without impairment. This, coupled with his bullet-proof suit, makes him rather difficult to harm without superhuman or advanced technological aid.

Enhanced Strength: Fox's strength is beyond that of a typical human of his size, able to lift 6 tons with effort. This strength extends to his striking ability as well, allowing him to punch holes through solid steel without hurting himself.

Enhanced Perception: Fox's senses are heightened beyond that of a typical human. This gives him an ability to see as well in the dark as he can in the day, hear a person's heartbeat through a brick wall, memorize and detect the scent of a specific person, and feel even slight vibrations in the ground or shifts in the air, alerting him of the presence of any otherwise unnoticed beings.

Immortality: Fox, like his cousin, is unable to be permanently killed by conventional means. Upon death, he will simply go into a healing coma and awake when well, the length of said coma depending on the severity of the injury. This immortality can by bypassed if Fox's heart is pierced with Shuen, which is rather difficult to do considering it's loss of effect when not wielded by Fox himself.

Bloodletting: Fox has complete control over his own blood. This can be used inside his body, sending blood away from a major wound so as to avoid blood loss, or sending more to his brain to promote deeper thought, or to his limbs to increase striking power or speed. This can also be used outside his body for offensive purposes, such as forming a projectile, which is seemingly solid due to his holding it together mentally, or injecting hi sown blood into another person and using said blood to wreak havoc on their systems internally.

Like his cousin, Fox's powers rely on the use of illicit substances, specifically Heroin. Even without the use of Heroin, he is still physically more powerful than an average boy his age, and his training is not lost on him. However, when not using his powers, he is crippled by a severe addiction to Methamphetamine.

Shuen: An unnaturally sharp Katana, made with seemingly unbreakable steel. It cuts through other metals effortlessly, as well as leaving 1st degree burns upon contact with skin, being incredibly hot despite it's normal appearance. If not wielded by Fox, as it was made specifically for him, it loses it's heat, and aside from it's indestructibility is seemingly a normal katana.

Judas: A Colt Single Action Army revolver made from indestructible black steel. This gun has mystical properties, as the need to reload is not present. One must simply spin the cylinder after the 6 shots have been fired, and the ammunition will somehow appear in it's place. The gun also has the unique ability to engrave the name of it's target into the bullet as it leaves the barrel. This engraving is controlled mentally, and can only be activated by a Hadley. This process, however, takes time, about 5 seconds, rendering the user vulnerable during this time. An engraved bullet has yet to miss it's target.

Injectors: Fox has built in to the fingers of his suit retractable needles, that upon pressing an activation button draw blood from him, and can be used both to easily move blood outside his body for bloodletting or to inject into the body of another.