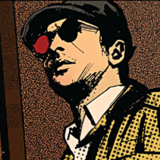 "A genocide of my gentle side"

Continuing the series where I select the single best CV character written by one of CV's greatest ever character writers (Mercy, LL, Nova, Zauby and Gambler) and justify my claim that said character is said RP'er/writer's best and among the greatest in CV history, this piece will be about the greatest and most ideologically complex character Gambler has ever written; Charlemagne LeBeau. Now, this was no easy to choice to make given that another Gambler character, Quintus Knightfall, is a very strong candidate as well. However, why I chose Charlemagne is because of the ethical complexity and ideological aspects of his characterization, as well as his key role in the most memorable and dominant conflict in nU history (mutants vs. humans), and his secure position as the deadliest one-on-one melee fighter in CV history.

Before becoming the boogeyman of mutant-kind, Charlemagne was born in Saarbrücken, Germany to David Saint LeBeau and Josette Inez LeBeau of the House of LeBeau. Recruited by Red September, a secret society devoted to the formation of a New World Order, it was under their tutelage that the root of Charlemagne's strong anti-mutant ideology emerged. With the growth of the metahuman community, and in particular the growth of the mutant population, Red September's concerns quickly moved from world domination to ensuring that mankind's place at the helm of evolution never be threatened. A concern that became the precursor to what one day become Charlemagne's violent pro-human and anti-mutant/meta ideology.

As his hatred for the mutant population and metahuman community stirred, Charlemagne studied at the Swiss Institute of Technology, taking a special interest in evolution, biology and it's sub-fields. And it was at the Swiss Institute of Technology that Charlemagne's anti-mutant sentiments were empathized with by more morally ambiguous professors with whom his discussions of genetic warfare, evolution and molecular biology led to Charlemagne's intellectual and ideological justifications for his hatred of mutant-kind. Having learned what he'd set out to, Charlemagne abandoned his academic pursuits and joined the French Foreign Legion, quickly earning a transfer to the 13th Parachute Dragoon Regiment. Armed with a nurtured intellect, and the military and combat skills earned from his training on counter-insurgency, counter-terrorism etc., Charlemagne embarked on a lifelong mission to protect the interests, prosperity, self-determination and evolutionary trajectory of mankind - through control of the metahuman community and the genocide of mutant-kind.

To do so, Charlemagne formed the HALO Corporation and led a group of genetic supermen called the Ultra-Sapiens. He dove deeper into the realm of genetic modifications, arming himself with the necessary skills and abilities to counter carriers of the X-Gene. He spearheaded a Superhuman Registration Act that triggered a war within the metahuman community, brought Venezuela to it's knees, feuded with Knightfalls, with the most greatest hero in the nU (Abigail Aensland), and waged an indirect war against the Court of Arcani through his campaign anti-mutant violence. Now that we know who Charlemagne is, let's explore why he's possibly Gambler's greatest ever character.

Like Zeon Liafador, Charlemagne is a complex outlaw/badass archetype. He is self-sufficient, uncompromising, embraces his own uniqueness, shuns conformity, and is driven by a personal code or ideology, his being one that's focused on securing the evolutionary dominance of mankind. Charlemagne however, is more morally questionable with the means he uses to achieve his ends. Not only does he engage in mass manipulation, but he is a mass murdering proponent of mutant genocide. So while his goal of protecting the interests and evolutionary dominance of mankind may have strong ethical reasoning and may even be noble, the means he uses to achieve this goal are not only morally questionable but morally abhorrent. And yet, Charlemagne is one of the most complex characters in CV history.

Firstly, Charlemagne is something of an homage to early 19th century character writing while simultaneously retaining key aspects of modern approaches to characterization through the exploration of his psychological disposition. Now, what about Charlemagne is a callback to early 19th century character writing? It's the fact that Charlemagne represents a metaphor or idea. He embodies an allegory, not entirely, because he does represent himself, but he also very strongly represents one, an idea, and two, a class of people. The class of people Charlemagne represents are humans - he represents mankind in opposition of mutants and the metahuman community overall. And the idea he embodies or communicates by acting as a narrative vehicle? Mankind's fear of evolutionary subservience. He represents ideas regarding the survival of humanity in unfamiliar situations, specifically humanity's survival in an environment with a growing population of fantastical and superior beings e.g. mutants. And this idea he embodies is best expressed through his pro-human/anti-mutant ideology. One that has a strong line of ethical reasoning.

Human history is rife with examples of the consequences of an inferior civilization crossing paths with a more advanced one. The inferior civilization is either destroyed, enslaved or conquered. And from an evolutionary perspective, each individual in an ecosystem needs resources to survive, prosper and reproduce. So there is competition. Intraspecific competition between members of the same species, and interspecific competition between members of different species that require the same resources. And two groups cannot occupy the same position of dominance in an ecosystem. One group will inevitably fall to the other. This is Charlemagne's fear. This is the root of his obsession with maintaining the evolutionary security of mankind. And it is how this idea or Charlemagne's nature as an allegory is reconciled with his internal characterization that sets the bar for his psychological complexity. It allows us to see the foundation of Charlemagne's actions and decision-making. With it, we can understand why he acts this way instead of another. We understand his motives, and his feelings of purpose.

Through his internal characterization, Charlemagne's greatest conflict with himself is explored. Specifically, his fear of and anxiety over mankind losing it's position of evolutionary dominance to mutants and by extension, his fear of the metahuman community establishing a status quo of dominance. It's why he's obsessed with the idea of mutant genocide and poured so much energy into the Superhuman Registration Act. These are his solutions, his attempts at preventing his fears from being realized. So through his internal characterization, we explore Charlemagne's ethical decision-making and see a glimpse of the ethical complexity of the character. And that is because from an ethical standpoint, Charlemagne complicates things. Why? He is at the heart of an unofficial war between humans and mutants, a war founded upon the moral responsibility he feels as a human to the human race. A war based on the distinction between humans and mutants and the evolutionary conflict that inevitably arises between two similar and closely competing species or groups.

Charlemagne is spearheading the efforts of his side in a conflict more nuanced than most of the conflicts in CV history. CV RPG is comic book-based, so it follows the trend of comic books featuring ideological conflicts that are resolves through battles. And these ideological conflicts almost always embody the dichotomy between good and evil in that there is almost always a side you will and are supposed to agree with (the morally right side of the conflict) and a side you will and are supposed to disagree with (the morally wrong side of the conflict). This is the basis for the classic portrayal of superhero vs. super-villain conflict. Charlemagne however, is far more nuanced. He is not a morally straightforward character. He is morally questionable but not irredeemable because his goal to protect the interests and survival chances of humanity can be empathized and sympathized with, no matter how extreme his methods. To prevent the possible death of one's species/race is virtuous within the boundaries of that species/race.

In Charlemagne's mind, and this is expressed through some of his dialogue, his actions are justified because they are ultimately virtuous within the context of his efforts to save humanity from possible extinction or a future of subservience. And while Charlemagne's internal characterization is impressive, his external characterization is not lacking as he illustrates how an environment shapes a character. He is a human whose world views etc. are shaped in part by this new environment full of these otherworldly and super-powered beings. The greatest relationship Charlemagne has is not with other characters, but his environment. Because in him, we see a human who is part of a world where mankind's status as the dominant species is threatened by the existence of mutants etc. and the pro-mutant actions of the Court of Arcani. A human who must and has oriented himself to the unfamiliar situation he is facing.

And this all lends to his ethical complexity as he analyzes the humans vs. mutants conflict and evaluates what he as a human owes to mankind (the group he feels a moral responsibility for and obligation to) and what he can do to ensure it's prospects of survival and continued evolutionary dominance. Charlemagne's answer to that? Mass manipulation. Genocide. Forceful laws. And a bloody pro-human campaign fueled by a messiah complex that has seen him become not only one of the most self-sufficient characters in CV history, but one of it's most complex. Through his self-sufficiency, he became the deadliest melee combatant in CV history and alongside characters like Kratesis, expanded the scope of a character's effectiveness and efficiency in battle. He achieved prominence as one of the few human characters dominated by an era of mutants and nGods. And he is one of CV history's most psychologically and ethically complex characters.

Having done my piece on Charlemagne LeBeau, the next and final character for this series will be a Zauby character: Abigail Aensland