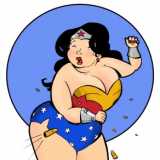 Amanda Waller is probably one of the most well-known "non-hero, non-villain" characters of DC. She's appeared predominantly in the more recent Justice League animated series, made an appeared in Batman Beyond, as well as at least one DC animated film. She has had many "badass" moments, and is an extremely powerful woman with ties to various government agencies, and connections that would make leaders of nations jealous. She has created and lead more than one task force. She is incredibly intelligent in a different way than, say, Ray Palmer. She is a strategist. Intelligence expert, extremely highly trained in espionage and game theory. While she is quite well-off, her power doesn't come from her wealth. She is not a socialite. She is a powerful woman. And she happens to be big.

Amanda Waller has been inked at different proportions, but she has always been drawn larger. She did, at one point, shed a fair amount of pounds...but she was still "bigger". It is part of her characterization, and I feel that it is a positive one that has only added to her character.

Between "hero" and "villain", she is normally placed as a "villain", but this is not accurate. She is a patriot; most closely associated with the American government and more hush-hush branches of it.

But in any case, my point is that she has always been portrayed as a large, powerful, confident and intelligent woman. Amanda "the Wall" Waller as an example of a girl from the projects, through sheer force of will, determination and intelligence, became one of the world's most powerful women. She is not large for comedic value, and characters don't regularly crack jokes about her weight or look down on her for it, because she is a badass. I feel she loses a lot of her presence as a thin woman, and it makes her feel that much more generic. That being said, it has nothing to do being a role model for "big" women, or even black women. Because she isn't, necesarily. Being large is part of her characterization, and I don't see any reason to make her "hot". I feel like it is a bit of a cop-out on DC's part, and I am slightly disappointed.

But on the note of inclusion, in a DC world more and more filling its status quo on gays and minorities, there is no room for a large woman. No pun intended. In the New 52 Teen Titans run, "Bunker" is a homosexual Mexican. Alan Scott's coming out also caused a big fuss - no less because he actually has fathered two children in previous main continuity. But Amanda Waller apparently has to lose weight to be an appealing character. And not only lose weight, but chemically straighten her hair, show cleavage and glob on make-up. I'm not at all a feminist. This comes legitimately from the fact that I enjoyed a larger Amanda Waller.

Plus, there are very few things more badass than a big black woman with an attitude leading a team of munitions experts into a mission and massacring an entire criminal syndicate.

That being said, this goes out to Amanda "the Wall" Waller. She will never be the same, and that's a sad thing for DC.