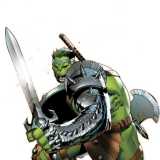 Move aside Marvel & DC titles! IDW's Godzilla: Rulers of Earth #8 is set to burn you all into nothing but ash!!!

"No one punches my Mjolnir"

hasnt Aaron destroyed Thor enough... are we being punk'd?

I believe the real question/statement is: Hasn't Marvel and it's various executives, editors and writers tarnished our much-beloved legacy characters enough?

The answer is, unfortunately, apparently not. :/

Now, in regards to the series, I will say that THANOS is definitely one of the few, better, engaging monthly titles that Marvel is releasing. Good art, an intriguing story, and loads of cosmic potential. Let's hope that Jeff Lemire utilizes the Mad Titan to the fullest.

Oh, hey the series that will lead into anti-hero thanos becoming the new Captain Marvel or something...

Or Marvel plans on temporarily replacing him with another cosmic villain/antagonist who, much like all the other Marvel stand-ins for major legacy characters, will fall greatly short and prove unsuccessful.

It's so cheap and lazy, both in creativity and writing. Marvel could be doing what DC is doing. That's adding diversity the right way without it being forced or feeling cheap/lazy in creativity or forcing our favorite legacy characters to take a back seat for an extended period of time.

This is probably going to be one of the best, and extremely few, titles coming out monthly from Marvel. Why? Because everything else pretty much sucks and is meh/underwhelming or mediocre at best.

Of course, that's what happens when you let extremist SJWs, Liberals and other imbeciles dictate what comics are being allowed to be produced.

Anyway, it's refreshing to have at least an extremely small selection of Marvel titles that're actually worth purchasing.

I believe all of us true HULK/BANNER fans do as well. He'll no doubt be back in time for the release of Thor: Ragnarok. Not that it matters- as fellow Hulk fans like @atheistknowledge, @theacidskull, @thedailybagel & others can attest to - the damage has been done by Jason Aaron's horrific garbage run, Mark Waid's underwhelming run, Gerry Duggan's disappointing run, and the collective garbage done by Bendis, Alonso & Duggan to Banner after he was cured and during & after he was murdered for pure shock value (which was disgusting, appalling and downright insulting).

I don't miss Banner. He's been around for how many decades now?

Says the person who knows nothing about the character and probably supports all the garbage Marvel has been spewing out these last 4-6 years, which includes throwing favorite legacy characters under the bus and reducing them to mantles for supporting characters of different race, gender, or whatever to take the spotlight instead of giving them their own book/series to focus on.

I sometimes wonder if this is really written by Greg Pak?

On another note, Asrar is probably the worst pick they could've done. I like his style but it just doesn't fit the Hulk book in any way at all.

He's a better choice than the previous artist's single issue. Personally, I find Asrar's art to be pretty strong so far.

I still wish Pak was writing Banner. Instead we have him fangirling over the Jeremy Lin crossover and displaying pride over his Asian heritage. Am I the only one who doesn't understand this pride involving race? I mean, shouldn't pride be reserved for something you've actually done or accomplished, not something that you're genetically born with? I have the same problem with those who take way too much pride in their sexuality, gender, religious, or political views.

I miss Banner too ...but I kind of accept Cho as the new Hulk. Aside from Rick Jones, and his ACTUAL son Skaar, he's the only one I see worthy enough to take up the mantle for now.

On the Skaar note... why didn't he become the new Hulk again?!

My thing is I don't think the Hulk is a mantle. I mean it is essentially Bruce Banner himself (maybe that is how they are going to bring him back). How are you going to pass a piece of your consciousness on? I always believed that the reason Banner survived his accident and that the Hulk was so strong was because of something inherently special about him. I mean every time they tried to recreate it they never got to where Banner was. Now to see it treated as a title one can simply give away really irks me.

Cho is Hulk from now on I accept that I guess it will just take more time for me to get used to that.

I think we all know how you feel, dude. Plus, add into the fact that Hulk has been with Banner even before the gamma bomb unleashed him (as seen in PAD's Tempest Fugit). Even among the other Hulks- Skaar, She-Hulk, Red Hulk, A-Bomb, Red She-Hulk and Lyra - Banner has always been in a class by himself and genuinely unique. The Hulk is not a mantle, despite what some may think or believe.

And believe me, this charade of Amadeus Cho being the Hulk, or rather a Hulk? It isn't going to last. Sooner or later, Banner is gonna be back. And hopefully stronger, angrier and better than ever.

@stormphoenix: This is not black panthers vibranium suit

Do you have definitive proof of that claim/statement?

@blue_son: Skaar was depowered during Waids Doc Green stuff if I can remember.

Yeah I remember that, I just think that it is BS that they depowered the ONE person who deserves the title of Hulk above anyone else other than Banner. His own damn son.

Yeah, I agree with you 100%. Which is one of the many reasons why I detested Gerry Duggan's Omega Hulk arch that proved to be nothing but underwhelming & utterly disappointing. If anyone actually deserved to be the Hulk if something were to happen to Banner/Hulk, it'd be Skaar. No contest.

Well, looks like T'challa's Hulkbuster works as well as Tony's

Not surprising. Despite utilizing different methods, it's useless to engage and try to defeat the Hulk with pure force. 'Cause he's only going to get angrier and stronger as the fight goes onward.

His portrayal of Doctor Strange and that series sucks as well. And his Hulk run was nothing but pure utter garbage. As was Original Sin. Personally, his Thor writing became mediocre on the Last Days of Midgard arch, which for many reasons was poor. His Gorr saga was superb, his Accursed arch was good. But the rest? It borders on meh to awful.

This book can go take a hike. It's a complete disgrace to the character, lore, mythos and supporting cast of Thor. The fact that Jane has to co-opt her ex boyfriend identity should speak volumes on the level of creativity and writers block Marvel has at the moment. As well as respect for their A-Listers. Jane never was, and never will be popular enough to build a foundation for a book on her own merits. I'm just waiting for this nonsense to end so we can get some real Thor stories, it's been 3 years and it's been a steady state of regression, not just for him but Marvel throughout. I say this as a longstanding comic fan, who's become disgruntled and demoralized by some of these choices the company makes. Here's to the Thor Odinson we know and love coming back, and this madness to end and never be brought up again.

I think all of us Hulk fans/readers, Captain America fans/readers, Doctor Strange fans/readers, and others know what you're going through & understand how you feel. Honestly, I do. I haven't truly enjoyed a Hulk comic since Pak's original departure after his Heart of the Monster finale.

Yes. Give the kiddies their own comic and keep them off the Avengers.

Too bad that Marvel can't do the same by giving Bruce Banner/Hulk, Thor Odinson, Steve Rogers/Captain America and others their own books (with them remaining intact and without them being cast aside, or have their history butchered by lame PR stunts that involve either race, gender, politics, religion, or whatever lame idea Axel Alonso & company wish to shove down our throats) while giving the newbies their own titles to pay homage to the established, popular legacy characters.

I miss the days of Brubaker, Cap has been awful since he left. Remender's run was bad but Spencer's has been terrible so far in both books. Nothing screams social justice like a white dude looking down his nose at people.

My thoughts exactly. Captain America, regardless of who is at the mantle, has sucked since Ed Brubaker departed.