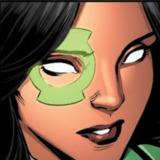 The final battle was upon him, thanks to his team. Mogu had kicked off the Sinestra Corps members with the few remaining Green Sentinels. Even Vai had gotten involved in the beginning. No idea where she went to now.

It was down to Hal and Sinestra now, mentor and former friend against her former student and lover. Hal gives her an opportunity to surrender, but she does not. Spouting that nonsense about fear being the only order in the universe. Hal retorts, "If that's true, then why do I always beat you?" That sent Sinestra into a crazed rage as the two fought it out.

Both combatants gave as good as they got. Both suffering injuries neither opponent would soon forget. The battle was long, hard and it was the toughest fight of Hal's life. Sinestra was no pushover, neither was Hal. But in the end, he finally won. Sinestra was stripped of her ring and placed in a Sciencell. And then he did what She'arah told him not to do. He contacted the Sentinels of the Universe. They returned, very subtly admitting that their absence was in error.

The rebuilding process then began and new Green Sentinels began being recruited.

As for Hal Knight, he returned home. Back to Metro City, back to being a Reporter. Annnnnd, he totally forgets to call Vai.