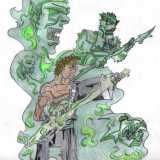 So I'm getting back in.

I've lost about 25 lbs and am working as best as I can to get back into the Army Reserves, I actually miss it now that I've been away.

This decision was made for multiple reasons,
1- I actually liked it, but I wanted some time away to see if I could do without it.  Apparently I can't.
2- After looking over the budget I had while I was in before I have found that the enlistment is a good financial decision and the most secure job I could ever have.
3- The long term pay off like a government retirement are very appealing and would help out a lot later in life since there will be no Social Security.
4- Who doesn't like a job where you get to carry a rifle all day.

Okay, so I have been reading a lot of Shaman King Lately, great series in my opinion, and now I learn that the series had stopped being printed by Shonen Jump in Japan before the series could finish. So that sucks right? Right, But on top of that I learn that a new magazine Jump Square (Might have those switched) is picking up the series, but haven't said if they are gonna re- run the whole series before they release the last parts that haven't been seen yet. SO, I'm angry.

Not gonna be posting on tyhe threads for awhile, PM me if you wanna talk.

Cryo & Sketchtor: Love the pics you guys did here recently. I checked them out on the 2nd and really like what you have done.

Everyone else: Happy New Year.

Made it, and I only had to kill one Smurf.

I need to sleep more and find other times to be one this addiction of ours. It sucks having to choose between such important things as comic book addiction and sleep.

Manga vs Comics. The Hardcore of the hardcore.

Well I know for one that this is a comicbook web community, but manga are comics too. I wanted to get feed back on who others think the toughest or the most ruthless of characters are. You can eve rank them if you want. Feel free to criticize my picks too and have fun. My tops.

2.Nicholas D. Wolfwood- Trigun manga. A Priest whose cross doubles as a heavy machince gun and a rocket launcher. Not only will he kill you, but he'll give you your last rights.

3.Alucard- Hellsing manga. Not the lamenting guy from Castlevaia, but the shapeshifting psychopath that tends to devour his enemies either by draining their blood or turning into a dog and chowing down.

4.Quicksilver- Marvel comics. He changed the whole world to make himself and his sister happy and then went through hell while he was depowered.

5.Darkseid- DC comics. Few names bring up hatred from so many heroes in any universe. Even fewer have pushed Superman to his limit while he was at hi prime.

Hey I am new to the comic vine, but I have been a huge fan of comics and manga for years. I haven't had much of a chance to read many lately though. I was deployed to Iraq and made it home safe, now I just need to catch up.

Blogs Created:
8 blogs
Most Commented blog:
Manga vs Comics. The Hardcore of the hardcore.
Total Comments on blogs:
19 comments