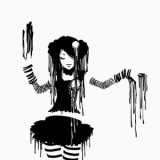 Her name is Verona Darkmage. Born:1992, Died:2006. She was walking home from High school on Christmas Eve. It was snowing and the wind blew slightly. She turned a corner and a man held a gun to her. He demanded her Bag, so Verona gave it to him. She could smell the alchohol in his breath, and she tried to play it safe. In his drunken rage he killed her anyway. The snow ran red with her blood as her spirit left her body. Verona's soul wandered through the Astral Plane for too long, not able to enter the after-life, something was holding her back. She managed to return to the human realm. Once her spirit had been avenged, She still could not depart into the Abyss. Verona had to defend other innocents from those who were black-hearted. And so, with her new found other-worldly powers, she became Ghoul, Haunting the hearts of those who would do wrong.

Before she died, Verona found a book buried beneath the floors of her house in Salem, MA. Seconds before she found the book, she was looked in the eyes by a Raven. She thought nothing of it, but after opening the book she knew there was something wrong. When she opened the book, a flash of violet soared into the heavens, then stopped as abruptly as it came. There were no words in the book at all. No letters, no sentences, no chapters. All the was said was on the inside front cover: This book belongs to The Mystik. She thought the book useless until words began forming. Impetuously, she read them and blacked out. When she awoke, a blizzard had blanketed the entire east coast. Upon further investigation, she found out the book was a Grimoire, a book of witch's spells. By opening the book, she had become a witch.

But after a stunning course of events, she found out she wasn't just any witch, she was The Mystik, one of three ancient Mages destined to govern over the Magic in the world. The Mystik governed over Dark Magic, and dealt heavily with the forces of life and death. A few days after she found the book, she was killed by her boyfriend, Damien Nigromante. He had wanted to take the book and give it to someone else who wanted to be the Mystik. Little did Damien know that he was in fact securing Ghoul's position as Mystik. The Mages' are always a combination of their magic and themself. When Ghoul died, she and her magic blended, making her a ghost. She came back and from then on protected the City of Salem under the cover of The Painted Lady, an old myth in Salem.

After a while, her exploits attracted attention. A person by the name of Scott Wolfman, the hero known as Cryo-Wolf, and his girlfriend Moonchild Fairwind had come to investigate The Painted Lady, thinking her to be a vengeful spirit that needed to be sent back to Hell. After a heated battle, she slipped into revealing that she was The Mystik. Moonhild then revealed that she was the second Mage, The Shaman, and that Cryo was The Centurion, a messiah of the Greek Gods destined to unite the Mages against the Diabolos, the devil. The Shaman governed over Nature Magic, and dealt with the elements. She agreed to go with them to find the other Mage to rebel against the Diabolos, which she horribly found out was her ex-boyfriend, Damien.

Before they could leave Salem, a man blocked their path. Ghoul knew immediately that there was something wrong, since the shadows of Salem were flocking to him instead of to her. He told them his name was Arrow, and he was the true Mystik. Arrow had wanted to be The Mystik ever since he found out of its existence. He wanted to use the forces of Dark Magic to overthrow the earth. Arrow sided with Damien when Damien promised him the position of Mystik. Arrow had come to Salem wanting revenge for being robbed of The Mystik. He waged war against the Three, but in the end was subdued by The Mystik herself. It came down to a battle of dark magic, and Arrow, thinking the best for himself, fled to regroup. He now sides with Damien in the War to come.