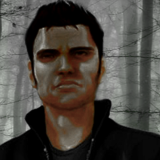 Base of Operations: The Santa Azote

Superhuman Strength: The primary effect of Scourge's Titan is that it enhances his strength to low superhuman levels, depending on how much Titan is injected. While injected, Scourge is able to bend thick steel. When Scourge injects the maximum amount of Titan that is considered healthy into himself, he becomes capable of lifting about 2 tons. He is ultimately capable of exceeding his limit to 3 tons, though not without temporarily losing control over himself.

Enhanced Reflexes: Under the effects of Titan, Scourge can react just as fast as the fittest human can. Scourge has fought many opponents while applying his tactics and supporting his massive frame.

Enhanced Speed: Under the effects of Titan, Scourge can run as fast as the fittest human can. Running on par with Olympic runners, Scourge can support his weight while maintaining a high rate of speed.

Superhuman Durability: Under the effects of Titan, Scourge can withstand powerful blows from metahumans, multiple bullets and explosions. With mere scratches and bruises Scourge has withstood extreme torment at the hands of his enemies.

Accelerated Healing: Scourge can also use his Titan as a form of medicine to heal from injuries, poisons and diseases. Depending on how devastating the injury, Scourge needs to inject a certain amount of Titan into himself. When faced with extreme wounds, such as many broken bones, excessive blood loss, or terminal poisons or diseases, Scourge needs to inject an unhealthy amount of Titan which will cause him to temporarily go berserk in order to heal properly.

Genius Level Intellect: Scourge is also highly intelligent. He has learned various scientific disciplines equal to the level of understanding of leading experts in those fields, making him a genius.

Photographic Memory: Scourge has a photographic memory, which borders on absolute total recall. This has allowed him to memorize the countless skills, disciplines, and facts that he has learned over the years.

Polymath: Scourge has completely memorized all the facts in countless encyclopedias and books. He is exceptionally knowledgeable in various subjects including Mathematics, various Sciences, History, Geography, Medicine, and most likely more, to a level that would have definitely given him degrees in these fields.

Combative Sailing: Scourge is both extremely skilled with navigating and maneuvering a boat, as well as doing so aggressively. He is able to make split-second decisions and specializes in naval combat, being one of the most dangerous men in the water.

Escapology: Scourge is unchallenged in the arts of escaping and infiltration, and has managed to break out of various maximum security centers.

Martial Arts: Scourge is a highly formidable combatant who has not only mastered, but also created several forms of martial arts. Scourge's fighting ability combined with his peak strength and endurance make him a highly formidable opponent for any non-meta and many metahuman foes.

Swordsmanship: Scourge is a skilled swordsman, being able to use his blade with extreme precision and efficiency both as an offensive and defensive weapon.

Marksmanship: While not notably talented with firearms, Scourge is at least on par with the skill of a trained solider in terms of accuracy with firearms, being able to hold his own while still putting his ammunition to efficient and effective use.

Tactical Analysis: He is also highly devious, and a superb strategist and tactician who has committed various famous war manuals (such as Sun Tzu's "The Art of War" and Karl von Clausewitz's "On War") to memory. As the Captain of the Santa Azote, Scourge must be able to make decisions in battle as well as command his crew. He has yet to fail in his duties as Captain.

Intimidation: Scourge is extremely adept at intimidating both his enemies and his crew, believing that image is everything. He poses as the devil for those who it will effect, instilling fear into the hearts of even (and especially) those closest to him.

Armor Suit: An integral part of Scourge's battle gear is his armored diving suit. This suit is composed of heavy materials and metal plating, providing much protection, while still providing added strength and mobility due to the usage of Titan. The sleeves of the suit have IV ports for Titan injection and a tube for transporting Titan from his tank straight to his wrists, to allow swift replenishment even during combat. Titan fed intravenously to Scourge through the suit, making him capable of continuing fighting while replenishing his Titan reserves. The helmet has reinforced ports for viewing on the front and sides of the mask, limiting peripheral vision to a degree, but still providing protection to the face and head.

Titan: Titan is a highly addictive superdrug. Scourge's Titan, usually injected in a constant supply into the base of the neck or wrists would simply transform someone into a hulking mass of unbridled physical strength. Scourge's apparatus included a special boost button to give him a jolt of Titan when needed. However, as the drug wore off or when the user was cut off from its constant supply, their body would rapidly return to its original state or sometimes even weaker, at which point the user would suffer from massive, debilitating withdrawal, usually accompanied by terrifying hallucinations. This strain of Titan did not, however, cause insanity as a direct result of it's usage. Later developed strains, called Splice, which are used by Scourge's crew rather than himself, are much more dangerous, both to the user and those around them. Splice allows for genetic modification and mutation, giving the user super powers. Splice powerful, but excessive use of it leads to physical and mental addiction and instability. Among the many applications of Splice are mild pyrokinesis, electrokinesis, cryokinesis/hydrokinesis, telekinesis, command over insects, temporary increases of physical speed and durability, and much more.

Titan Dependency: Scourge suffers from a crippling addiction to Titan. If he is separated from his supply, his physical ability will drop below what is average of a man his age who exercises regularly once the dose already in his veins runs out. This can be achieved by targeting the canisters which hold Scourges Titan and the tubes feeding it to him.