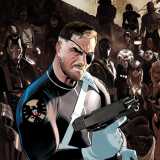 This blog is dedicated to the future of Bruce Wayne, and I'm pretty sure when Grant Morrison said Bruce Wayne would never be the same..he was damn right.
The past two days I've taken time looking over a bit of Grant Morrisons works on Batman and his run on the Seven Soldiers of Victory. These titles arcs I had gone through where Batman Arkham Asylum,Batman The Cult by Jim Starlin,Batman Gothic,Detective Comics 618 and 619,Batman Dark Knight Dark City by Peter Milligan, The Killing Joke by Alan Moore, 52, Batman RIP, Battle For the Cowl Arkham Asylum, and Batman and Robin. Of course I have read through most of these series but a good friend of mine reccomended that I look through the first series of books, most published in 1988-1990 and noticed a HUGE tie in that leads to what's being published today in Batman and Robin written by the same guy who had a had in the books from 20 years ago. Grant Morrison I figure if I use pictures it will easily save me time in this thread compared to writing extremely long paragraphs and wasting your time when you can just stare at the pretty picttures :) Also this is a theory open to debate but keep your flaming out if that's what you've come to do.

For the first part of my theory, STAY AWAY FROM MIRRORS WHEN IN THE DCU..for what reasons? mainly these reasons some of them have led to madness in the dcu for people like the Joker and the new Black Mask Jeremiah Arkham the image has a little profanity in it..why? because it was what was going through my mind at the time of seeing this all happen.

Not the Obeah Man himself, no I noticed a recurring theme of mirrors in transformative trauma much like what the Joker underwent in his flashbacks via The Killing Joke, where he only went insane after looking at his own reflection. In Morrison's Arkham Asylum (source of the panel where we find out he claims to be possessed by a voodoo Loa), Amadeus Arkham's journal reveals that a Depression-era killer named "Mad Dog" Hawkins, whose facial structure and laughter evokes the Joker and who mutilated the faces and genitalia of his victims, was killed by Amadeus in the asylum - afterwards, he thought that Hawkins was laughing at him from inside the mirrors, and taped over them... until he eventually peeled back the tape, looked in the mirror, and went insane. Jeremiah Arkham looked into the *exact same mirror* just before he developed the Black Mask split persona... this happened in the same one-shot that introduced Narcissus, and had No-Face painting the Joker-like face.

Professor Pyg is meant to evoke the Joker's ringmaster-from-hell persona and even uses the same circus from The Killing Joke - and he mutilates the faces of his victims (and maybe the sexual organs too, given his psychosexual ramblings) - and his last lines... well, just look at the image macro.

Crazy is it not?

Now on to the next, the next being Amadeus Arkham,Mad Dog Hawkins, and Barbatos the evil Man-Bat.


Another crazy thing I noticed during the madness that is A Serious House on Serious Earth..Now for what tortures Amadeus through the Mirrors, Barbatos.

Now for the biggest part of my Theory, I've read a few Grant Morrison interviews on various websites about the current events of Batman and Robin only out of curiosity to see if he'd reveal anything, than I found this gem and everything was opening up to a much larger picture. The picture being this one.

It's crazy yet at the same time it all seems plausible, due to an issue of Batman and Robin where we found something in Batman's cave that looked FAR too familiar to miss!.

This could be true due to most of the New Gods returning at the end of Final Crisis 7, the only two that didn't return would be Darkseid and Orion.it's all making sense right?

Barbatos is tied into the prophecies of the Crime Bible, book of the Darkseid-worshipping Intergang - the ceremony of the bat, as seen in 52. Until Barbatos was named, all signs pointed towards the faceless devil worshipped by Hurt and his cohorts to be Darkseid himself.

Barbatos is the Fifth World equivalent of Darkseid... therefore, Batman MUST be the Fifth World equivalent of Orion... the forsaken son of the ultimate evil, born at his cruel hands (in Batman's case, created in Crime Alley - Gotham is, after all, "a grid designed to create Batman", and Barbatos IS Gotham) and then cast out of the dark lord's realm (Apokolips/Gotham)... so alike his father, yet destined to stalwartly oppose, and eventually defeat him. Like Orion, Batman is a master of the hunt - the masked manhunter.

All that Morrison has put Batman through is a baptism-of-fire meant to prove him worthy of this - the EXACT same thing he put Shiloh Norman through to prove worthy of being the Mr. Miracle of the Fifth World, Omega Sanction and all.

Now with that said and done..there's one person left to talk about and that would be Desaad, Darkseids adviser and master of torture, and guess who this all ties back to? the freakin Obeah Man that Murdered Tim Drakes mom and paralyzed Tim Drake's father!


If you do not believe that these men have anything to do with Darkseid, check this scan from the Terror Titans.

With that said, my theory is over..Feel free to discuss it and ask me any questions if you have them..I hope it turns out this way because I sure as hell am loving the idea.

I'm torn i'm stuck between these ones.


I seriously love moments like this, there's nothing like good humor in comics and for them to lighten up instead of living to a grim-dark standard would make me happy.

lets hear it for fun!
8 Comments

Justice League International! all kinds of people are on the team, and I could have a ridiculous amount of fun with them even if I just get one of them.


It's a great book with a great writer and great art, the stories are constantly fun and you always end up loving the big meathead that is hercules more and more after each issue, it's just pure fun to read!
Start the Conversation

I've noticed since I've been here starting a year ago, the quality of debaters/battle threads have gone down at least in my opinion. Some of the greats have stayed here like Creator,Vance,King,AtPhantom,Static and others have even come back like the Man of Yesteryear and new amazing debaters like Morpheus have came. The battle threads have just begun to overflow with junk that doesn't even belong on on the battle forums. I see most people using battles that aren't related to comics and are just cheap TV characters used. I remember when I first got here the depth of debaters was so good that I didn't even wanna try with some of them. Now it's mostly become filled with trolls who fail to listen or people that make things up because of severe fanboyism or because they feel like it. Most people tend to not even use the search function, which is there for a reason! I'm not calling anyone out at all because that's not my style :) i'm generally a nice guy who is friendly to anyone who is willing to accept logic and not get so mad. I see users cussing at others because they disagree with them, and im here wondering what the heck! it's only the internet nothing big. Than there's the fact if you make a good thread or one you feel is great using new characters, it sucks because nobody will reply because they fail to be open minded and not give the character a chance because they haven't heard of them. This website is a great encyclopedia yet some people fail to grasp the attention that, that is one of the main purposes of this website!(atleast from my point of view).

If this blog innapropriate at all let me know.

Magneto has helped people to see there full extent of powers..with him I know what I could be capable of