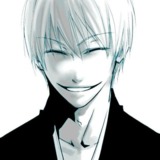 Obito Uchiha was a member of the Uchiha clan of Konohagakure. He is thought to have died during the Third Shinobi World War, and the Sharingan he gave to his teammate Kakashi Hatake is his last surviving legacy. In reality, Madara rescued Obito's life and taught him, but the war's events disillusioned him with reality, and he inherited Madara's plan to construct an ideal society. Obito resurfaced as Tobi and Madara Uchiha himself, quietly gaining control of the Akatsuki and using them to further his plans, eventually going public and initiating the Fourth Shinobi World War.

The Sharingan is the Uchiha clan's dōjutsu Kekkei Genkai that only emerges among its members. It is considered one of the "Three Great Dōjutsu," together with the Byakugan and the Rinnegan. While its powers were derived from Kaguya Otsutsuki's Rinne Sharingan, Indra Otsutsuki (Hagoromo Otsutsuki in the anime) was the first to manifest it in its independent form, When a user of this Kekkei Genkai has a strong emotional reaction to someone they care about, their brain releases a specific type of chakra that affects the optic nerves, changing the eyes into Sharingan; as a result, the Sharingan is referred to as an "eye that reflects the heart."

This feeling is frequently negative, as seen by the Uchiha's so-called "Curse of Hatred," which is triggered by stress or loss.

Positive emotions, such as a desire to protect can also trigger the emotion.

When a Sharingan is first awakened, they normally only have one tomoe in each eye, yet in some cases, they get two tomoe in each eye right away. The Sharingan will continue to mature as a result of emotional growth under harsh conditions, with a third tomoe representing full maturity. All of the Sharingan's basic abilities are available to the user from the start, but as the user develops, so does their expertise with them.

Sensing the flow of chakra

Chakra is composed of physical and spiritual energy, it is essential to even the most basic of Jutsu/abilities in Naruto.

The user can see chakra and color it to differentiate it based on its composition and source.It can see chakra through some blockages and detect irregularities in a person's chakra flow, such as those induced by Genjutsu influence, though not as well as the Byakugan.

The user gains extraordinary clarity of perception, allowing them to read lips or imitate pencil movements. The Sharingan of Sasuke Uchiha could even see at the cellular level. In combat, this allows them to see fast-moving objects and, once fully developed, provides some predictive capabilities: they can predict an opponent's next move based on the slightest muscle tension in their body and act accordingly to dodge or intercept.

They can also read the enemy's hand seals to give them an insight into the nature of the performed technique, regardless of the speed of performance, so long as the hands are not physically hidden from view.

The user can memorize Ninjutsu, Genjutsu, and Taijutsu with near-perfect accuracy, and can reproduce practically any Jutsu they observe. They can then use the Jutsu or alter it to fit their needs, such as Sasuke Uchiha's Lion Combo, which is based on Rock Lee's Front Lotus. Again, before they can mimic a Jutsu they've seen, Sharingan users must have the prerequisite skills, which means they can't, for example, recreate Kekkei Genkai abilities they don't have or nature changes they haven't learned to accomplish.

While the ability has many different expressions and purposes, the most well-known one is to use illusions on a target through eye contact, potentially without the target's knowledge, coercing them to give information or act in a certain way. In extreme situations, the Sharingan user can gain entire control of the target's body, forcing them to perform exactly as the controller wishes; this control is visible in the target's eye.

The user can also perform forbidden Jutsu's among the Uchiha clan like the Izanagi (Which Obito has been shown to use) which has the ability to warp reality by changing illusions to reality and reality to illusions thus rewriting destiny.

For the next section I will elaborate on the Sharingan's next evolution (The Mangekyo Sharingan) and the ability Obito has with it (Kamui).

TheMangekyo Sharingan is an advanced form of the Sharingan that has only been activated by a handful of Uchiha. The appearance of a Mangekyo Sharingan, which modifies the form of the tomoe seal, distinguishes it from a regular Sharingan. While each user's design is unique, they all resemble pinwheels. It is initially triggered by the trauma of watching someone close to the user's death. Because the Uchiha have historically misinterpreted this condition as requiring the user to be responsible for the person's death, they have created the habit of murdering their closest friends in order to get the Mangekyo Sharingan. Obito's Mangekyo was activated as soon as he witnessed his best friend kill his sweetheart, The Mangekyō Sharingan retains all of the Sharingan's generic abilities. In addition to that, the Mangekyō grants powerful abilities that differ between each eye

But there is one flaw in it, The Mangekyo over time would start to lose its sight and make the user blind this can be circumvented if the user transplants a close relative's eyes into his own causing the awakening of the Eternal Mangekyo Sharingan.

In Obito's case, the ability he got after awakening the Mangekyo is known as Kamui, this ability has two variations between long-range and short-range use, due to Obito giving one of his eyes as a gift to his best friend Kakashi just before Obito "dies" Obito only retains the short-range version of the technique.

Kamui is Obito's most used ability.

A short-range variation of Kamui is utilized with Obito's right Mangekyo. Obito frequently employs this version on himself, sucking himself into his right eye to enter Kamui's dimension and then emerging to wherever he wishes. He does this to avoid attacks sometimes, while on other occasions he does it to go large distances. Obito can teleport at any time and does not need to designate a location ahead of time.

Others have deemed Obito's teleportation superior to the Flying Thunder God Technique (a technique that instantly teleports the user to any location they have marked with a formula) because he can do it at any time and does not need to indicate his destination ahead of time, others, in addition to or instead of Obito, can be drawn into Kamui's dimension through his eye, and it is actually faster for him to use Kamui on others than on himself.Obito is frequently portrayed demanding personal touch with persons on whom he is using Kamui, however, this isn't always the case.

When Obito's right Mangekyo is activated, he can turn his body "intangible," instantly moving bodily bits that would have come into contact with the overlapping matter into the Kamui dimension. Obito often uses this ability defensively, making all attacks pass through him harmlessly. Obito can also use this ability to pass through barriers or other obstacles, travel underground, and surprise opponents with assaults from below.

Or to extend the range of his weapons and ambush his enemies by making his Gunbai phase flow through objects. Because the transfer occurs unconsciously, Obito is unable to physically interact with anything he was not in contact with before to the ability's activation, forcing him to turn solid if he intends to engage in physical combat, another weakness is the intangibility only lasts for 5 minutes forcing Obito to turn solid after.

During the mission at Kusagakure, Obito's right side was brutally damaged, and he even lost his right arm. Madara supplied Obito with the same substance that the White Zetsu are comprised of to heal his body and replace the limb, boosting his chakra reserves and eventually allowing him to perform Wood Release. He also obtains physical enhancements from Hashirama Senju's DNA, such as greater resistance to attacks, fast healing, and the capacity to go without food or water.

Obito learned a variety of ninjutsu from Madara, including how to create barrier ninjutsu to protect the Demonic Statue using the Uchiha Flame Formation,how to sense chakra to predict attacks and locate others from great distances, even in different dimensions.

The user kneads chakra within their body and transforms it into fire, which is then ejected in a large stream from the mouth. When the user expands their stomach, the blaze spirals around the opponent, engulfing them in a gigantic vortex with no way out, leaving them to suffer and burn. Kamui can be used to summon a whirlwind to aid in the construction of the fiery spiral if necessary.

Obito could perform Wood Release, a chakra that combines earth and water. He could produce branches and roots instinctively to bind, crush, or skewer opponents.

Not a whole lot since Obito is a hax-oriented character.

Destroyed a guy's head to an absolute pulp with his punches as a kid.

Cracked an entire boulder as a kid.

Take out 3 skilled ninjas with a single kick as a kid.

His best friend Kakashi was able to tag Lightning as a kid.

Could dodge the 4th Raikage's punch who is one of the fastest ninjas.

Was able to teleport Sasuke away from the Particle Style Cube with no one noticing.

Would not hesitate to use a child as a hostage.

Obito learned a lot from Madara about the world, the unique people in it, and various powers throughout history. As a result, it's difficult to catch him off guard in combat because he already knows what techniques ninja from specific villages are likely to employ, how to exploit different opponents' weaknesses, and how to defeat most Jutsu. When he comes across something new, he keeps his distance and watches carefully until he figures out the best way to neutralize it. His foresight allows him to plan years ahead of time, perfectly forecasting the fate of nations and understanding how to exploit them to his benefit. If any of his plans fail for whatever reason, he can quickly and painlessly devise a backup strategy, demonstrating tremendous strategic and tactical ingenuity. Indeed, Obito had a variety of backup plans and rarely put his faith in a single conclusion. Obito also exhibits strong manipulative skills, able to discern the darkness in others and use it to his advantage through a cunning combination of truth and lies.

Obito is a character with one very formidable ability (Kamui) supported by being an experienced ninja and being trained by one of the strongest shinobi of all time (Madara), Obito is a person who you do not want to fight without any solid knowledge about him, I'll plan to make an RT for his Rinnegan version and later for his Juubi version, I always thought this poor guy was a misunderstood character that didn't deserve most of the criticism he gets from the Naruto fanbase.