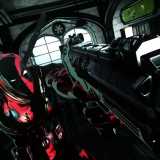 The return of the King: Band Lone is back in the mask

This is before my invasion on L.O.V.E's Flight test RPG:

Within the thick walls of the Phoenix manor the double dragons Elian and Band Lone discussed the future of the mantel of the mercenary of greatness. Not once, but twice has the mantel falling in the wrong hands in order to spread panic across the land. First the now dead Femme Bandit and fallowing her steps a  young fool who thought could handle the responsibility of been a lethal tool of assassination.

After going through the concern it was decided by Elian Allen that the best way to keep G’bandit from becoming a title of fear was to spread a message across the land to those who dare wear the colors of the mercenary for their own benefit. Band Lone had retired from the black and crimson armor, however, Elian gave him no choice but to return to the mantel of the king of mercs. For in Elian’s eyes only Band has ever surpass the hype of the original Bandit and has made a legend far greater that Elian ever could dream of.

Like it has been accustomed the Red Brotherhood [ Band’s team] had reached once again the big apple after capturing one of the posing fools that dare to call himself G’bandit just because he wore a cheap leather uniform that resemblance his own.

The mega screens in time square once again as it had before about a year ago they turned crimson red and the modified American flag appeared across the screen and into the nation’s eyes. The message was simple. The Red Brotherhood was back in business and anyone whop dare mock its leader’s image or defy its authority would be eliminated. In order to make the message a memorable one the blood of one of the copy cat G’bandits was spilled right before the eyes of thousands. “I hope the message went through.” Said the mercenary just before the screen turn black and the a room above it exploded. Panic spread through time square as the mercenary made his escape silently disguising himself as a tourist.

Back at the Phoenix Manor

Elian sitting on a couch holding a martini on his right hand while watching the local news report of the event that occurred. Through the door enters the Red Brotherhood, butr Band signals P. Rain and Albany to stay behind. The door closes and Band alone he confronts the billionaire playboy Allen. “That was quite a show you put out there.. For a Pacifist.” Said Elian after taking sip of his cup.

Band after a mild sigh he removes the Bandit mask as he replies. “I’m back in this because of you so don’t push it. It be over when you realize there is nothing we can do. People have taken the Bandit mantel before and forever they will regardless. Bandit has become a symbol of terror-”

“And why is that Band?” Asked Elian. Band seems to urge to reply but Elian continues interrupting the king of mercs: “G’bandit operated in secrecy, It was a stealth art, not an amusement. The reason why I had less glory than you did is because I kept my business to myself and did things quietly. I did not see this like a play ground like you, all I wanted was to end it not make G’bandit a world wide icon of rebellion.”

Bandf turns around walking towards the door but then he stops. “You don’t understand a damn nthing of what I’ve been through Elian.. I guess if anything went wrong you could always go cry on a pile of money . If anything went wring I got punished.. Only way I manage to survive was to see my job as a video game.. That kept me alive emotionally and spiritually without getting the urges to blow my brains out.”

He continued: “If there is nothing for me then I’ll be with my crew.” Band notice Elian was watching Band’s moves through the screen reflection and to ensure Elian of Band’s awareness the current G’bandit bowed looking straight to the screen “Later, your highness.”

Elian realizing Band was as sharp as ever he found no words, but a mild chuckled came from his reverence to the mercenary. Band finally made it out the door before the words of Elian reached his ears “There is something..”

Rolling his eyes as her thought he would get a chance to reast Band turns around and awaited Elian’s orders.

“R.O.R was contact seeking aid from a new client. Is a small job but I figure you can have some fun with it. I reckon your team, is been updated ion the details as we speak, go to them.” ‘

Band turning towards the exit he sighed, “You’re a real slave driver, you know that?”

“I do now.” Chuckled Elian while Band put on his G’bandit mask and exit the room once again.