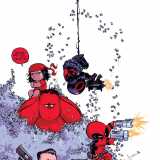 So what do you think it'll take for Cyclops to get back onto everyone's good side. A self-sacrifice that oh so many have done before him that will leave people with one last fond memory of him before Marvel decides to resurrect him. Him taking charge during some full frontal attack against the entire planet (maybe something along the lines of an invasion from the future kinda like Terminator but on a much bigger scale), or him just quietly sitting in prison paying for everything he's done until Matt Murdock causes the jury to see he was trying to do good but had his vision manipulated by the Phoenix Force?

Any ideas if Marvel will even come up with a good reason why he will be released?

The Other Horsemen of Apocalypse

So I was thinking that while Warren was trying to become the new Apocalypse and he had his own Horsemen, what happened to the former Horsemen that are still alive? We know Gambit's Death persona has resurfaced, Sunfire was last seen with his Famine powers still working, and Wolverine was there attacking him head on. Why didn't Warren just take control of their Horsemen sides and have them waiting incase X-Force managed to beat his own Horsemen? It looks like Gambit's Death his an ability we haven't seen yet where he puts people into his cards which would've been an easy way to finish off X-Force. Does anybody else think Warren should've called in other Horsemen for back-up to deal with X-Force?