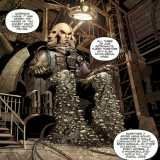 Hey Guys, I've just started writing a new fanfic; please give it a read if you're interested, and I will of course return the favour.

The story opens as Iron Spider brings together a group of superhumans from the fringes of the Marvel Universe to form a new organisation: The Web. The Web is not the Avengers. The Web is not the X-men. The Web is not the Fantastic Four. Lurking in the shadows, striking without warning, vanishing into the darkness. Together with Dragon Man, Lady Mastermind (Martinique Jason), and Alpha (Andy Maguire), the Iron Spider plans to save the world from any and all threats, including those who consider themselves its protectors. But who is the woman lost in the snow? What is the creature stirring in the ruins of Utopia? And who- or what- lies behind the mask of the Iron Spider?

I know I'm not the only one to think this, but I've wanted Wolverine dead for ages. He's a decent character, but he's just too overused. Admittedly, he's taken slightly less of a centre stage since he left X-Force, and he doesn't seem to be showing up much in Avengers, but the point remains valid.

Killing him off for a while (let's face it, no one stays dead forever where Marvel's concerned) would be a great way to shake things up a bit. For example, the books focusing on the Jean Grey School/ Xavier Institute would be massively affected, probably with Storm and Beast taking over full time as Headmistress and Headmaster. Likewise, it would be interesting to see what would happen on the Wolverine books. Perhaps X-23 could take over in a Legacy style? Or maybe it could become a team book ; X-23 recruiting characters like Daken and Sabertooth and others working together on Wolverine's unfinished business. And, for die-hard Wolverine fans, they could keep Savage Wolverine running as normal, because it's set in its own continuity (as far as I'm aware).

Anyone else curious about the rainbow-coloured head with the helicopter attachments floating around in the background of the covers? I'm guessing a fifth member, but any idea who it is?

Ah, but who says that Storm has to do anything to her hair to get it to look like that? She may not use any hair product at all, instead just generating a tiny breeze around her head in order to keep it standing upright.

I wasn't sure at first, but I actually really like it. It reminds me quite a lot of William Hartnell's costume, which makes sense as Capaldi is the same age now as Hartnell was when he first became the Doctor, and they are both the 'first' doctor of a regeneration cycle.

Does this mean that ultimate x-men is coming to an end? I'd be really sad to see it go, as the original run was my gateway into comics originally, and then the reboot was what reintroduced me to them again.

Even if there have been lots of unresolved plots and abrupt changes in direction (Phoenix? Apocalypse? Ghosts of dead x-men? What?) it's been a pretty good book, and it was nice to see some different characters getting the spotlight without all the baggage of 616.

I actually really liked this. I'm not generally much of a fan of the whole class-war thing, but I do enjoy books that treat things a little differently. The fact that the most immediate threat that the characters are facing is the law, rather than a traditional villain, makes a nice change. I also really like books about new characters, as I sometimes feel put off when I have to look up 20 years of backstory in order to understand a character's motivation.

That said, there could maybe be a little bit more info. on the team and their powers. In particular, I don't get Katharsis. Are the wings just gadgets, and purely mechanical, or is there some biological element in there as well (like Archangel in X-men)\? If they're mechanical, where did she get them from? Did she make them herself? Where did she get the money from, and why didn't she spend it helping other people? Where does she keep pulling those swords from? In fact, she's coming across a bit like a second-rate Batman (who is himself one of my least favourite characters in comics).

At the same time, I'm not sure about the background of the Sweatshop. I can understand how it ties into the story, but it felt a little bit forced, and more than slightly morbid. It's like when super villains make their secret bases in active volcanoes; yes, it looks cool, but it's both unfeasible and unrealistic. Having your base in what is effectively a mass-grave of immigrants just to make a political point seems redundant.

I always regretted not getting into X-treme X-men. It was such a cool idea, but I was never able to pick it up because of limited funds. I might try and pick up the trades, though. And I'm glad that they've kept gay Wolverine alive; we need more badass gay characters.

I don't really get why there's this sudden obsession in the x-books with Apocalypse and death seeds. It was interesting in Uncanny X-froce at first, but now it just seems like an excuse to turn good characters evil, or make established villains more powerful so that they're a series threat. The strange thing is that everybody seems to forget that Gambit was Death in the past, and so presumably has a death seed growing inside him, too. So why hasn't he become the new Apocalypse yet?