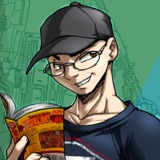 Challenge of the Demographics! Men and Women!

Strap yourself in. I'm about to blow away all your preconception about comic and manga gender demographics. It's actually more interesting than it sounds.

The demographics between men and women is often a heated discussion when it comes to comics, but it's just so difficult to find any solid numbers. People often feel or reluctantly accept that it's a boy's club. When I hear people in the US talk about manga, they seem to believe that manga are just as large a boy's club as comics if not larger toward a male audience. Well, I have some information that may surprise you.

Back in February of 2011, DC released a survey conducted by the venerable Nielsen Survey Group on the results from The New 52 reboot - - It's a reboot. Deal with it. A lot of articles published about this survey revealed that DC wasn't particularly happy with what they learned, and released the result with a list of bullet points to parse the results. They made a point of saying that this survey only questioned The New 52 buyers, but at the time The New 52 made up the vast majority of what they were publishing. Below is an image of the gender demographic portion.

In stores, DC had a 93% male readership and only 7% women. Online, things were generally better with 77% male and 23% female. I had heard that DC wanted a second Nielsen survey back in June, but I couldn't find the results anywhere. I also couldn't find any research on Marvel's gender gap for readers. Just the gender gap of creators. Most seem to feel it would be either equal to DC or slightly worse. Partly given how many often complain about the lack of female characters leading their own series. Though, some see hope for Marvel NOW to improve things. (see Why Marvel NOW! Is Great For Female Characters)

When many comic readers talk about manga, I often hear them bring up some of the negative stereotypes of fan service or harems. Well, harem series are a niche genre and aren't among the top selling series in Japan, and it's not as if fan service - cheesecake - doesn't exist in all of the top selling comics. Glass houses and all.

The term "shōnen" in Japanese literally means "young boy", but it's also used as a classification for a type of manga series. Classically, these are more oriented toward young men, but the same could be said about the most popular comics in North America. The focus is normally on action, fighting, comedy, or sports. One of the most popular shōnen serialized magazines in the world is Shueisha's WEEKLY SHŌNEN JUMP. This is the magazine that has brought us DRAGON BALL, NARUTO, ONE PIECE, BLEACH and countless other series since 1968.

On top of WEEKLY JUMP celebrating it's 45th anniversary this year, it can also boast that it has a 50/50 male to female readership, making it one of the most gender-neutral manga magazines. Nikkei Shimbun, one of the largest media corporations in Japan that specializes in publishing financial and business news, released in November the results of their look at the women who read WEEKLY JUMP. Here are the results of what Nikkei found.

For the benefit of those who don't read Japanese, I've translated the graph's results in the tables below. Though, big surprise. Pink is for girls, and Blue is for boys.

Some of these series popular among women aren't about romance or things many often associate with female readers. HAIKYUU!!, which has a 66.8% majority of women, is about a soccer team. NISEKOI, which has an 83.3% majority of men, is a romantic-comedy. ONE PIECE is my favorite among what is known as the Shōnen Trilogy (ONE PIECE, NARUTO, and BLEACH). I always knew that ONE PIECE had a strong female following, but I was quite surprised to see they're actually the majority.

There is an interesting fact about these numbers that wasn't covered in Nikkei Shimbun's research that I'd like to show you.

The Oricon Group tracks the sales of all media in Japan. This includes manga volumes, and every November they release a top sales chart. It only includes the sales of all new volumes released that year. It doesn't include any back issue volume sales. This chart I'm going to show you is not exclusive to Shueisha produced series. This includes all manga sold in Japan by all publishers between November 2011-November 2012. Shueisha's are just often the most popular, and I'm highlighting these few for a reason.

I wanted to show you this chart of manga sales to make a point. It's not just that the highest selling series have the smaller gender gaps - - though that is worth mentioning. Which makes sense. The more inclusive you are the larger your sales. You're appealing to more people. There is still something else interesting about these numbers.

As you can see, no series is a serious competitor to ONE PIECE, but look at KUROKO NO BASUKE (aka KUROKO'S BASKETBALL). That's the series in the chart above ONE PIECE with the 56.9% female readership. It also had the largest jump from 24th to 2nd. Basically, the top two selling manga series in Japan for 2012 had a majority female readership. When has any comic book ever done that?

You really have to wonder about what it is that these creators and companies do to bring in the balance of readers that they get. What are your thoughts on these facts?

-Kristoffer Remmell (FoxxFireArt) is a freelance graphic artist, writer, and over all mystery geek.- Follow for news updates: @ FoxxFireArt