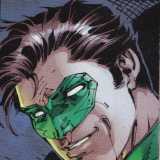 Maybe its about Peter Parker's ghost? My first impression was,

A. Peter's ghost was a pretty similar blue as the smoke and text.

C. "Be Vigilant." Has Peter been appearing in the background of issues and we just haven't been vigilant enough? Or if he has not, will he, sometime soon??

That's just my theory. Any thoughts?

I love the idea! I loved this issue! I love spider-man! In my opinion, he's the most progressed mainstream superhero of all. And before you start complaining about, "Oh but what about the marriage?! That was so dumb...blah blah blah... i don't know how to spider-man properly. Listen to me complain about this. Don't you hate this too?". Just forget about that already. One bad story doesn't ruin a character with now fifty years of rich history. Plus, its not Dan Slott's fault. He didnt write that story! He's the good guy. He's progressing the character in healthy and interesting ways. Peter Parker has been pushed further as of late than in the last god-knows-how-long. Peter Parker was a high school kid who grew up, lost loved ones, moved out, got different jobs and different friends. He's lived a good chunk of a lifetime, and unlike most comic book characters has an appropriate growth to show for it. He's completely different, yet fundamentally and recognizably the same person on the inside. I, for one, love the notion of a grown up Peter Parker. Im intrigued to watch him try to be an Uncle Ben to this Alpha kid. Sure, Alpha is a dumb name and he does have "Why does every character need to be ULTRA OMEGA DELUXE powered?" syndrome, but whatever, its really the Parker side of things that is important. This is a bold new step for Peter and one that I plan on sticking with firmly. He's a character that grew up alongside me and I respect him for it.

PS. The back up stories in 692 were amazing and touching and so many other words i cant think of now. Got the special Decades Covers and they are beautiful. Got 'em framed on my walls now. :)

@The_Tree: Hey! That used to be my store! Loved it! Real great, friendly place. :) Unfortunately, I moved, but now i have three stores! :D

Maybe there's something to his word choices... "seismic"? "landscape"? Maybe an earthquake or some other natural disaster.

I'd love to be a part of this!

Sigh...I love Hal Jordan A LOT. I don't care about what everyone says. This instance is just poor writing. I mean, what the f*ck? How does this forward the plot or characters? Instead of "What kind of person is Hal?", the real question is "what disgusting pervert wrote the damn thing?"

I really like the GL animated series. I think its a lot of fun. Its alot like star wars though in that Hal is Han Solo, Kilowog is Chewie and the robot girl is C3PO. Also it has a bit star trek-ish thing to it too; flying around in their awesome spaceship helping people around the universe. It's light-hearted and fun. Also, I think the characters are played pretty well, except the red guy. He's a little cliche and boring.

I'm a big fan of Barry, that's no secret, mostly because he's the Flash I started out with, but I'm even kinda mad at the disappearance of Wally. As for Jay....meh. He looks fine but I miss the old uniform, also why the trend of chinstraps on the Flashes? Weird.