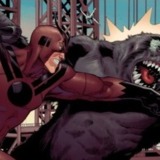 Dr. Aaron Palmer is the world's foremost expert on Source Particles, a unique form of energy that he himself discovered and named. He is one of the most brilliant people alive and is a hero of uncommon talents.

His crushing self-confidence issues hold him back, however. He hates fighting and only reserves it as a last resort.

Source Particles originate from an infinitessimally small space between dimensions. They allow for time travel, interdimensional gateways, and many other properties responsible for qualities seemingly out of science fiction. They are also the cause of Dr. Palmer's super powers because they allow him to grow and shrink to impossible sizes with no physical repercussion. As a final note, they are extremely electromagnetically volatile, meaning that they attract pretty much everything, including being able to pull intangible targets back into tangible space.

Dr. Palmer has invented many tools that help him in his fight against crime. One of his favorites is a helmet that allows him to communicate with ants.