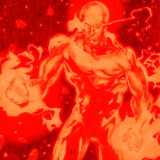 Jack was weak. He knew that this stupid cave would give him trouble, but there was nothing to work with, no light to absorb or control. Everything he did had to come from him, and he was getting very tired. Between being knocked out by the plant beast and helping contain Tanks massive explosion, Jack was running on empty. When he walked into the last chamber, and saw the stream of pure sunlight coming down, he almost cried with relief. He started sucking up light like a madman. but of coursae his relief was short lived. Domingo was already there, in giant purple armor with the logo of The Hairy Back Corporation. Is there anyone Dagger hasn't sold weaponry to?

Jack was hit by a burst of electricity, knocking him down and shocking him violently. He was breathing hard and was trembling from the after effects of the electricution. He absorbed all the light as he could while Tank brawled with Domingo, and he saw as Mercury was knocked back violently into the cave wall. Jack saw as Domingo carried Tank out of the cave and up into the atmosphere. By now, Jack was stable enough to get up, he grabbed the talisman that Tank had dropped and leapt strait up out of the hole in the top of the cavern, and into brilliant godsent tropical sunlight.

Firebrand was back, and better then ever. He rocketted up toward Tank and Domingo, and before he could get anywhere near them, way up in the outer atmosphere, Jack saw Tank lose his grip and fall. It felt like hours that Tank fell through the air, ice encasing almost his entire body. Domingo was coming back down to finish off Jack and Mercury and Jack knew he had to act, but had no idea how. Then he heard Tank yell out at the top of his lungs "HE'S COMIN' BACK! GET THE IDOL AND TURN HIS ASS INTO AN APE!" Jack would have punched himself in the face, if he had the time. Jack would have one shot at this. If he missed then Santiago could hit him with that electrical beam and Jack would be through, Santiago would win, and the entire mission would be caput. Jack did the only thing he could thing of, he focused all the sunlight he could through the gems on the artifact, and redirected them straight for Santiago.

The armor suddenly stalled, and fell. Jack flew over to check on Tank, sitting at the bottom of his little crater. Jack hit Tank with a wave of IR light, vaporizing the ice that encased him. Jack reached down and helped him up before seeing Mercury flying toward them swiftly. Jack scooped tank up in a light bubble and flew them both to meet Mercury over at the crash site. They landed and took a moment to regroup before approaching the wreckage. Jack was entirely unsure what to expect as they approached.

#2  Edited By Fire-brand
@614azrael: I'm sure she will. i've got to post in another RP under this profile, but then i'll switch and post.
11 years ago

#3  Edited By Fire-brand
@thegreatfour: um, what the hell? you need to explain that one

@614azrael:
my thoughts exactly. only problem is that theres another user named spectrum. i'm gonna have to go with something like Full Spectrum, or something.
11 years ago

#4  Edited By Fire-brand
@614azrael: It kinda fits. plus there is only one other character named spectrum and all he does is change colors (Lame)
11 years ago

I'm thinking Spectrum for my new name. what do you all think?

#6  Edited By Fire-brand
@CaptainCockblock:  OH, see i thought it was actually Dagger in the suit, so i was kinda freaking out. and no, i don't care if your nude, but that makes your junk a bit of a target. i figured some nice new light-clothes would be nice.
11 years ago

#8  Edited By Fire-brand
@614azrael: aww. bummer. could be worse. everyone could think you had a completely different powerset then you do. i need a new name...
11 years ago

#10  Edited By Fire-brand
@614azrael: well, it's not a very good party if all the buildings stay up. i finish off every party by punching the ground with a fistful off omega rays. BOOM
11 years ago