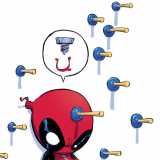 My journey into comicdom.

2010 ends my second year as a comic reader. Reading about Dick Grayson taking up the cowl drew me in and I read pretty much Batman and the Batman Reborn titles for a few months. Since then, I've seen Bruce Wayne return through time and I've seen him also assume the role of Batman, allowing Dick to still wear the mantle as well. In between then, I saw Green Lantern become reborn along with the Flash (who had the slowest mini schedule). I witnessed the Sinestro Corps wage war with the Green Lantern Corps who were recharged and I've seen the Brightest Day shine through the Blackest Night. Perhaps saddest of all, I saw Boy Blue die.

That aside, I've become pretty hooked to comics, it really has dominated my other hobbies, without cutting out any semblance of a social life I have and hasn't hurt my wallet too bad. The worst is behind me now, finding back issues, getting up to date the good old fashioned way and not just reading Wikipedia or Comic Vince as it were. I've come to find that I prefer books that focus on a sole hero over those that focus on a team, but I still enjoy team books, as long as it isn't just a group of heroes tossed together for the sake of having a book.  I can't get much into the Justice League or the Avengers, but the Agents of Atlas and Doom Patrol have a soft spot in my heart and one will be sorely missed.

DC has become my publisher of choice, I found out I knew a good deal about DC before I started reading comics. Most of it I attribute to watching just about every DCAU since Batman: TAS until now and reading random forum posts. I did try to give Marvel some love to, but outside of Spider-Man and Agents of Atlas, I haven't found any book I might stick with for more than a few issues, although recently I have taken a liking to Marjorie Liu's X-23 series and am glad it quit tying into the Wolverine Goes to Hell story. Vertigo has maybe been the most pleasant surprise, everything I have been recommended has been great, Fables resonates the most with me, probably because I was raised on Disney and still have a great deal of affection for their older movies (and a few of the newer ones). Image, BOOM! and Aspen round out the publishers I currently read, but as long as my budget can sustain it, I'm always looking for new books to read.

To an extent I've learned what creative teams I enjoy, but still, even though I've been told not to, have some sense of character loyalty. I mean, I did buy OMIT after all. As a Batman fan it's probably cliche, but right now Grant Morrison is definitely my favorite writer. Not just because of Batman, I've been making it a point to read his earlier work and as of now, I'm enamored with his Doom Patrol, more so than I was with his Batman run. The quirkiness and absolute craziness he brings to the Doom Patrol was definitely a breath of fresh air to me, even if it started over 20 years ago.

Moving into 2011, I plan to keep following the books I have been and inevitably try more series and get a bigger spot to store my comics. Right now, Flashpoint and War of the Green Lanterns, as well as progression into the ultimate goal of Batman Incorporated are what I'm most excited for, but I'm still holding out hope that I'll see Boy Blue again in the pages of Fables and not just in a flash back.