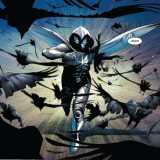 Are there any fellow Woodbadge participants out there?

If the Freedom Fighters hadn't just come back, I would have said them... but I would have to go with Marvel Knights.  I liked that "un-team" they had going.  Rip up the baddies.

in the basement, on the bike.

My exercise bike is in the basement.  I usually read 3-4 while I'm getting my morning ride in... before anybody else is up in the house.  It's a quiet time, no distractions and helps the time go fast when I'm pedaling my ass off.

I stopped reading comics in the Early 90's... The last title I read seriously was Batman: Shadow of the Bat.  I quit at issue 41, so that would put me summer of '95.  Now, here I am in 2010 getting back into the comic world... thanks to an interest by my son... and enjoying it.  The part that makes my head reel is the changes that have taken place.  Holy cow, things are different now.  The storylines are more in depth, graphic, adult oriented.  The events that have taken plan... Civil War, Blackest Night, Infinity Crisis, Armageddon, Secret Wars... Holy cow, I can't keep up.
New characters, the characters I know are different, ones I really liked are gone.  Whew!
I'm slowly finding my way again.  This site does give me a lot of information when something in an issue doesn't makes sense to me.
For now, I'll keep filling in the gaps in my older titles and reading a few of the new ones, trying to fill in the info here on Comic Vine on the older issues that have missing data and have some fun with it.

Freedom Fighters are back!

Is anybody else excited about the return of the Freedom Fighters?  I used to go to a pawn shop in my home town... way back in the late 70's and picked up a  few copies of the Freedom Fighters.  I liked them back then.  When I saw that they were coming back, I really had to jump on board and give it a try.  Then I saw it was being written by the duo that is doing the Jonah Hex title, I was really excited!
I really liked the first issue and am anticipating #2.
Is too early to get excited, or just run with it?  lol

I travel a lot for work and fun, and when I'm in different cities/towns, I like to pop into the local shops.  I like to see how they are different from my local (small town) shop, what they have for old issues, how the atmosphere is, etc.

A couple I have found that I would definitely go back to are...
Mind's Eye Comics - Eagan, MN.  The staff was very helpful.  Little touch that made me say I'd go back... they bagged every issue for me that I purchased.  Appreciated touch.
Vault of Midnight - Ann Arbor, MI.  Great staff that's REALLY excited about comics.  Huge section of just kids comics.  Haven't seen one that large since.  The lower level had a large assortment of back issues and helped me fill in some gaps in my collection.  I've called them before to get some comics I missed and they were great to work with.
Newcastle Comics - St. Louis area.  The guy that owns the place was very helpful and friendly.  Good selection of kids comics, and back issues.
Fat Moose Comics - Whippany, NJ.  Had a great selection of comics.  I spent a bit of time looking thru his older comics and found some gems... can't wait to read them.  I'll be back when I'm in the area.

Let me know where there are some other great shops for me to stop in when I travel around?  Thanks!

Finding the right comics for the kids...

Having a boy 9 (the reason I got back into comics after 20 years) and a girl that is 6, I find the search for the right titles difficult.  I need to be concerned with content first of all.  I love the fact that Marvel rates each title to give me an idea what might be appropriate for them.  And the local comic shop sets aside a section for the kid specific titles.  For the boy, he has a sub to Marvel Adventures Spider-man and Super Hero Squad (which is another topic to itself!) it was difficult to pick out more titles for his pull list.  We've settled on Batman: Brave and the Bold, Invincible Iron-man and Marvel Adventures Super Heroes.  Listening to him read Super Hero Squad and laughing out loud is music to my ears.
Now, my daughter is a different story.  She's got a sub to Tiny Titans and LOVES that one... can't wait for it to come each month.  On her pull, we have Cars: the Adventures of Tow Mater, Archie and (for now) the Simpsons.  We had the Shrek free comic book day issue and she really like that one.  Unfortunately, it doesn't look like an ongoing series.  We might have to check out Toy Story to replace the Simpsons.  Not that Simpsons is that bad, but... my daughter just doesn't get it.  She says she likes it, but...  Anybody have any thoughts on what would be good for a 6 year old girl that would be an ongoing title?

"Back in the day", I was never a huge Captain America fan.  Maybe it's because a fellow comic book reader was actually named Steve Rogers and he would rant and rave about CAPTAIN AMERICA!!! So of course, I wanted to find somebody else to follow.  Fast forward to today.  On a whim, I added Cap to my pull list.  I'm really enjoying this new Cap series.  I hope they keep this level up.  I've had to go back and trying to back fill with the older copies in this series.

Now that I've finished filling in some gaps on my Micronauts I'm re-reading it from start to finish.  I loved it when it first came out and I'm really enjoying it again.  I liked how that team, with their different talents and ideologies worked together.

I'm still bummed about the Vengeance of Moon Knight ending.  My favorite character dropped again.  I wish he'd get a continuing book of his own.  I guess I'll have to run with Secret Avengers for now to keep up on him.