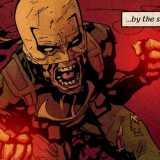 Alright then, here's the next chapter. Enjoy!


“Jesus Christ! Are you alright?!” I ask Dragon Tycoon Z.

“I th-think I’ll live,” he coughs, “There are more important matters at hand, though.”

“You’re right, Dragon. We need to figure out who our captors are working for,” Halberd says, “Electrix, are you getting any matches on your internal databanks?”

“No. The uniforms don’t bring up any hits, and there really isn’t much to go off of other than that,” the technomancer replies.

“Have you tried looking into any underground databases?” Halberd asks, “Maybe they’re part of an out of town crime syndicate? Check A.M.O.K.’s files.”

“I would, Halberd, but I don’t know how much I can use my powers without these bombs going off,” Electrix groans, “It looks like we’ll just have to wait and see how this plays out.”

“Um, excuse me sir?” I try to get Halberd’s attention.

“Yes, son? What is it?” Halberd turns to me, and gives me a look as if he’s noticing me for the first time since he was dragged into this room.

“Yeah, my name’s Fastforward. I’m pretty new to the business, and I’ve just suffered some major head trauma, so I’m more than a little confused right now. And seeing as how you’re considered the best of the best in our little town, I assume that you’re more aware of what’s going on right now than I am. So anybody care to tell me what the hell is happening?” I spout out.

“Jesus. You’ve got some mouth on you, don’tcha, kid.” Comet grumbles.

“Solstice is right. You do deserve to know what’s going on,” Halberd says to me, “Unfortunately, we have no idea. We’ve never seen these men in our lives.”

“Screwed? Us? We’re the Crucible! We’ve taken down people worse than these chumps for years. We’re gonna be fine!” Dragon Tycoon says, with surprising ferocity for a man who had just been shot.

“Well, you guys are the Crucible. I’m just a guy who can run real fast. I’m as good as dead.” I groan.

“Son, there’s no need to talk like that,” Halberd says, his eyes piercing into my very soul, “I promise you, no matter what, you are getting out of here alive. I swear it.”

“Wow. If you ever have to quit the hero business, you’ve got quite a future in motivational speaking ahead of you,” I joke, easing up a little bit.

“And you in stand-up comedy. Either that or telemarketing,” Halberd cracks a joke, something that I didn’t know was even possible, “Hold on. It sounds like our captors are coming back.”

Sure enough, there comes a sound of footsteps, followed by the return of the two hooded assailants. They carry what looks like a large set of television recording equipment through the wooden double-doors. Following them is an enormous man cloaked in red robes. He has an ancient, carved ivory mask covering his face. He exudes power and arrogance, but also an overpowering charisma, like a cult leader or a prophet. The guards begin setting up the cameras and microphones in front of us. Their master barely seems to take notice of us as he turns to face the cameras. He gives a signal to his men, and the cameras roll.

“Good evening, Redrock Ridge! I am Sovereign Sin. This is the Crucible,” he motions towards us, “And tonight…they die.”

As that last word leaves his mouth, he pulls a pistol from beneath his robes, and fires a single shot in our direction. It hits Halberd between the eyes, and with a shower of blood, the Crucible’s leader falls dead in front of me.

So, where did Jai get all these powers? Are we going to get an explanation or are we supposed to just look the other way?

Thanks for the comments, guys. Here's chapter 2!
Part Two

The first thing I notice in the large room they brought me into was the glaring spotlights, pointed straight in my direction. It was as if someone was filming an over-produced television commercial or something. I finally get used to the unrelenting light, and begin to look around the room. There are five doors on the same wall as the one I came through, and a very large, rather ornate set of double doors on the wall to my right.

The two guards pick me up again, and set me down with my face towards the six doors, giving me some relief from the bright lights. One of them slaps me on the back of the head.

“You stay put now, kid. We gotta go get the rest of our stars,” He says, as they enter the door next to mine.

When they return, they’re carrying with them another beaten, battered, and broken superhero. I recognize him instantly. It’s Halberd, leader of the Crucible. Seeing him there, I came to a startling realization. If he was there, that might mean…

Sure enough, one by one, the guards took the other four members of the Crucible from their holding rooms. Dragon Tycoon Z, a hyper-fighter straight from Japan. Electrix, daughter of the Crucible’s original technomancer, Wavelink. Comet, a local astronaut from Redrock Ridge who gained cosmic powers after an unearthly encounter. Solstice, a sorceress whose powers come from the very changing of the seasons. There they all are. The Crucible, Redrock Ridge’s premier superteam. There are other heroes in town, myself included, but none of us are anywhere near their level. They’re the best of the best. And they’re here, along with…me? That can’t be. There’s no way these hooded dorks and their boss can see me as being as much of a threat as the Crucible. I’m just not that good.

“Alright, people. We’re gonna head out for just one second,” One of the guards says, “And if you try to escape, the bombs in those restraints there’ll blow you all to hell. One of you tries something, all of you die. Got it?”

“Whatever it is you’re trying to do here, you’ll never succeed at it,” Halberd says in his inspiringly deep voice, “So you might as well let us go and save yourselves a beating!”

“Oh yeah? Is that so, blondie?” the other guard trotted over to the bound hero, “And how’re you gonna stop us? You’re all tied up!”

The other guard cackles, and they slap a high-five.

“You shut your mouth! Halberd is a great warrior!   He always thinks of something! We’ll get out of here and beat your faces in, you lousy little rats!” Dragon Tycoon Z shouts at the mocking guards.

“Why, you little-“ the guard yells, as he pulls out a large silver pistol, “Say that again, why don’t you!”

“Lousy. Little. Ra-Aaagh!” Dragon Tycoon Z is cut off by the sound of two bullets tearing into his knees.

“Tycoon!” Electrix shouts, as the others recoil in shock and rage, “I swear to god I’ll kill you! You die tonight!”

“Ooh, you’re feisty, aren’t you?” the shooter walks over to her, pointing the gun at her forehead, “Well, I won’t die until you do.”

“Awright, awright,” the shooter puts his gun away, “But we’ll be back, and we’re bringing the boss with us! And once he gets here, it’ll be time for the show to start! Hahahaha! Just you wait!”

And with that, the two men leave, and bring us one step closer to this show’s grim climax.

I felt like writing something today, so I put together my first ever story for Comicvine. Please enjoy!

The Schemes of Sovereign Sin

I wake up cold and aching, in a pitch-black room with not a single source of light to illuminate my surroundings. I try to move my arms, but they’ve been chained to the small wooden chair that I’ve found myself sitting in. Around my ankles is a pair of big metal shackles. Guess I won’t be running away from this place any time soon. Unless I can phase myself through them, that is.

Of course, whoever trapped me here has already prepared for that. The moment I try to activate my powers, the shackles send an electric current up my legs, shocking any thoughts of escape right out of my head. Those thoughts are quickly replaced by a multitude of unanswered questions. Where am I? Who brought me here? What do they want? I mean, I’ve only been a superhero for all of three months. It’s not like I have any real enemies yet. Just a bunch of small-time crooks and bank robbers. Hell, there hasn’t been a real supervillain in Redrock Ridge since the Crucible cleared all of them out in the 90s.

Then, something jogs my memory. I start to recall the events that led me here. There was a fire. An old apartment building had lit up, and one family was still caught inside. With only minutes between them and fiery death, who better to save them than someone who can run city to city in under sixty seconds? So I ran up the building, and leapt into a sixth-floor window. When I got inside the family’s apartment, the smoke finally started to get to me. My vision went blurry, and I fell to my knees. It definitely wasn’t any normal kind of smoke in there. There had to have been some kind of knockout gas in there. The last thing I saw was a couple of hooded figures in red uniforms, and a big black baton headed towards my face. They must have hit me. Hard. And judging by the bruises that covered my body, they didn’t stop.

Not two seconds after I realize what happened to me, a door in front of me slides open, filling the room with a blinding white light. Two of the hooded henchmen from the apartment fire step in, and walk towards me.

“Hey, looks like the kid is finally awake,” the one on the left says “Took him long enough.”

“Heh. The way we beat him, I’m surprised he woke up at all,” the right one laughs, “Help me move him. It’s almost time for the show to begin.”

Without any further words, they pick me up, chair and all, and carry me out the door, and into the light.

Any comments and criticisms are welcome and appreciated! Thanks for reading!

#8  Edited By Fastforward!
@Crazy Pan: Huh. That is quite interesting. Is illustrator a free program?
11 years ago

So, I'm assuming you do your coloring digitally, and you do a really amazing job of it. But do you do the drawings themselves on the computer too, or are they done on paper and then scanned in? Because I've tried to color my scanned in drawings on my computer, and it's really difficult. And when I try to draw with a tablet, I tend to do a real bad job. So how do you do it?

Sorry if I'm asking too much, I'd just like some tips is all. Keep up the great work!