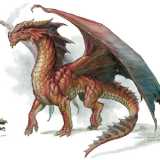 “He is the jester of our kind. Stupid. Obnoxious. And like all of that sort an endangerment to his own species. If I had the power I would have ended that fool eons ago.”

“A true monster. Rarely has our race suffered so much as from this battle hungry, genocidal maniac.”

“He has more wit than most of his kind, almost as much as us. I want to like him but then I get constantly reminded that he is one of those cursed Fire Dragons. I wonder what his greater plan might be.”

“He came, he seduced me and then he was gone like the wind which I claim to be my element. Ironic, isn’t it?”

“What was this strange being that I saw at the king’s coronation? He stood near him and looked like a man but seen from the edge of the eyes his shape widened deep into the room taking on a strange, almost reptilian form. I saw him at the festivities later on and many times at the king’s side but never in court. They say his name is Fang but what strange name is that? And who bears a burning lizard in his blazon?”

“That beast burned down a whole city for no reason and you could hear his laughter over the flames. The devil itself could not be more evil. I will make it my noble quest to hunt it down and give god’s justice to it. May he guide my hand when I finally drive my sword into this monster’s heart.”

“A very interesting elemental being of unknown intent. Like legendary Mephisto he pops out of nowhere offering his Faustian pacts and disappearing into thin air again with or without holding up his part of the deal. I have kept track of his enterprises of the last centuries and sometimes even beyond that but can make out no reasonable pattern or rhyme. A fickle as the wind, as mesmerizing as a star, as dangerous as fire. I have to watch him. I have to know him.”

“This cave painting is fantastic! So well preserved! From the earliest ages of mankind! It gives us new insight on very early religious practices. But I don’t understand yet why the people on this painting are obviously worshipping a burning lizard. I have to examine it closer.”

“This extraordinary fellow inspired me greatly! A true bon vivant with such astonishing tales to tell. Such a joie de vivre! I HAVE to write a book about him. He introduced himself by the extravagant name of Fang but I think for the book I will call him Dorian instead. Dorian Gray.”

“I wonder one thing… I mean, know that I am standing at the edge of the building on this black Thursday 1929 it doesn’t really matter anymore but… there seemed to be someone behind this stock exchange crash. A whole LOT of money was suddenly pulled from the market. It seemed like it was many people but then there are some hints that it all went to one source. And why did some brokers find a hand drawn picture of a burning lizard on their desks?”

“Do you know that guy Fang_The_Dragon? He is such a freaking uber-pro-gamer! Overwatch, Killer Instinct, Dark Souls 3, Forza 6, doesn’t matter. He pwns at everything. It’s so frustrating playing against him online but then he is such a nice guy with a love for every game…”

Base Of Operations: currently changing