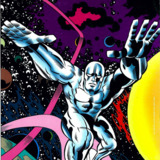 The Power Cosmic and the Lantern Power Batteries

I am working on an idea for fun that would be a "Marvel and DC" both in them. As well as a smattering of other Comics Universe. Not an Amalgam Universe. A Universe where they all co-existed.

What if the Power Cosmic, The Infinity Gems and The Lantern Batteries all interact. Are they one part of a larger power? Are they all different? Do they all work together? Explode when they are close to each other? What?

Marvel and DC Can Bite Me

Just back from the store and. . . Alright I am a fan of the Marvel and DC of years past. I love the characters. I grew up with the characters. I know a metric ton of history and own comics of the two. But come on guys! Marvel seems to always be in the middle of some "event that will change the Marvel Universe Forever ..Again . . .so buy these 10 character titles or you won't get the entire story" thing. Or the X-Men? Don't get me started. I feel like I am walking into Season 3 of Babylon 5 with no prior knowledge. Then DC who I thought was going in a good direction when they decided to create an Ultimates universe for the DC Line and bring over Wildstorm. Then brought back the originals. Was Batman and Robin in the New DC? Which Aquaman is cool? And the Lanterns are in a major war or something that changes the characters ...again.

Guys get your crap together! The movies ain't gonna save the comics! It's a different business! It's not the 90's either! 4 bucks a pop is too much to waste on New-Character-Of-The-Year-That-Won't-Be-Here-In-Two-Years book to get the full story on "the 52 Ultimate Secret Crisis of Infinite Zero Wars 2099". Grrrrrrrrr...

Okay there is something that has been really bothering me for years. So Peter Parker is so smart he gets to go behind the scenes of a high tech lab and talk to the scientist and is bitten by a radioactive spider. He gains power and his intelligence allows him to create, as a teenager in high school mind you, webslingers that shout a web. Invent the webbing that is super strong, fits into a spot 100 times smaller than it should, AND desolves into nothing over time. He is able to create a dunebuggy that can actually climb walls and drive on the ceiling. He creates a suit of special clothe just to resist Electro. But he is always broke and doing a third rate news paper job instead of hanging out with Tony Stark or Mr. Fantastic? What the Hell?