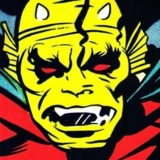 What happened with the site?

How About Vertigo Animated Movies?

Looking at that fact that the DC Animated movies seem to be good judging on what they do, how about they make some for the Vertigo comics? Like I think today it's clear we can have R rated cartoons based on Vertigo's comics. I mean it's taking forever to see movie like Fables and Sandman come out. So how would other feel if they made them as DVD cartoons instead?

Why Did iZombie End?

I'm not sure if this has been asked or not, but why did iZombie end? I thought the series was really original, fresh, and entertaining. Was kind of upset they had to concluded all the stories within a certain amount of time. It seemed like they had other plans for the ending. There just a handful of comics I'm completely satiated with the ending. Most just seem so random. This one I'm stuck in the middle. The art is always visually appealing and not everyone died at the end, but it seemed like there could have been more plot towards the end. I still think this would have been or could be an awesome TV show.

This my sound weird, but need some help. Need some followers and stockers if anyone wants to help.

Comic Books vs. Working Out

As anyone like me found that comic book heroes are a great way to stay motivated in the gym? Ever since I saw the X-Men cartoon way back in the 90s, I've always wanted to be and look like a superhero. I even created superheros myself that mimic me and what I want. However, since a year or two ago, I finally got motivated to use the gym and now I keep using it. Anyone else workout everyday and read comic books at the same time?

Kind of new to this site as an actual user. Very cool site to be on if you're a user I must say.