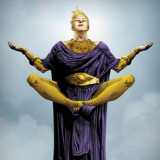 Picked up a near mint DC presents #1 today at a flea market.

So I finally decided to get into the respect thread game, and I'm going to open with my favorite character from The Flash: Eobard Thawne aka Harrison Wells aka The Reverse Flash. I'm going to go ahead and get into it, and try not to be too critical pls.

I've seen some inconsistencies in people's rankings of him among other live-action speedsters. I've seen him lower than MCU Quicksilver, and higher than Smallville Bart. Let's see if I can help clear some stuff out.

The first feat I will list will be up to speculation as all of the details weren't that clearly defined.*

- When Eobard is 'fully charged', and has access to enough Speed Force, he is able to time travel hundreds of years. We know that he is from the 25th century, and that he returned to the 20th century to try to kill Barry. Barry was only able to time travel 1-day by himself, and needed the use of the particle accelerator to go back 15 years.*

- The fastest Barry Allen ran in Season 1, was mach 2 (as stated by Cisco in the season finale). Mach 2 is roughly 1500 MPH, and Eobard proved several times, that he is in fact faster than the Flash. That would mean that he could probably run somewhere between Mach 2 & 3. (Exact number is up to speculation)

- This is also a solid speed feat. Eobard proceeds to take out 4-5 soldiers that are aimed at him before Eddie even has time to move his head. He then dodges a bullet that was already fired by Joe. Episode 9.

- Eobard is able to move fast enough that it creates a speed mirage, and thus, can appear to be in two places at the same time.

- This next feat is a little complicated, but I think it's his most impressive feat from the season. RF is trapped in the forcefield, and Wells is in his chair, visible, in front of him. RF proceeds to grab wells, and kick his OWN ass inside the forcefield, while making it look like there are two people the entire time. This is remarkably impressive, because he is constantly switching back and forth between RF and Wells in order to maintain both speed mirages. That means he keeps changing clothes as well. Cisco believes in ep. 15 that the RF in the forcefield was just a hologram, but that's not possible. I will explain more after these gifs...

The Reverse Flash leaves the forcefield and grabs the tachyon device from its stand, then proceeds to the end of the room. Take a look at this picture...

This is the best look I could get, because the RF is moving so fast during this entire scene. But in the backround, behind Eddie, you can see Wells still laying in the generator, beaten to a pulp. Of course, you can also see the RF in this scene, and the next shot is Zoom taking out those 5 soldiers. From the gifs, and this picture (as well as the knowledge that RF grabbed a physical object) we can conclude that the RF in the generator was not a hologram, and that Wells really was moving fast enough to create both mirages during that scene.

Eobard doesn't have too many durability feats, because he didn't get all that much screen time, and he rarely got tagged in the show.

- Here is a good one though. Zoom takes a fire blast from Firestorm, then gets right back up and runs away without a problem. Ep. 9

- Zoom was also able to take several hits from Ollie (who was just trained by the League of Assassins) in the season finale. Not that impressive, but like I said. Not many things to go by here.

- Another one that doesn't entirely apply to durability, but Zoom was also able to vibrate the 'anti-flash' serum thing that Ollie shot him with out of his own body.

Couple to go through here.

This is his best speed combat showing. He stomps Barry after Barry doesn't alter the timeline in the finale.

- This was actually quite a surprising feat. When Zoom temporarily loses his speed, he holds his own against Arrow, and actually appears to have the upper hand for a brief moment.

- Zoom is also able to throw Barry (with one arm) a distance of about 30 or so meters, and with such force that Barry breaks the sign that he hits.

- The first is his ability to phase through people. He uses it to crush people hearts. Ep. 15

He also does this to a reporter in another episode.

- His other ability is to create cyclones by rotating his arms, and send opponents flying, like he did to FireStorm in ep. 22. Firestorm flew what looked like half way across the city.

*Some of these are sort of speculation.

- Thawne created a device that... sucks the life out of people, transfers it to you, and gives you their physical appearance? (I have no idea if Thawne built this, or if it is just some weird f**ked up future tech.

- Retrofitted a tachyon emitter to power his speedforce abilites.

- Assisted Cisco in building a time-machine.

- Designed and built a particle accelerator with help.

- Repaired it by himself.

So that's what I have. I'm sure I probably missed some things, and if I did, please point them out to me. I appreciate all feedback, and hope this thread proves both interesting and useful to you. Thanks guys!