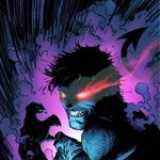 This is my book that im writing and i was wondering if i could get some sort of feedback. just PM me with any info or suggestions.

"The Rise Of ETERNUS

Chapter 1: How It Began

“Hey mutant, where you going. Going to go get drunk and kill some innocent?”

“C’mon guys, leave the old bastard alone” I said “it is getting late anyway we got to get home”

“No way man, the fun is just beginning” Said Mike. Mike had always been one troublemaker too many, he thought of most of the devious things we had done but had very little to do with it once we were caught. He barely even took part in what we did when we were just having fun; tonight it seemed he wanted to go out in a blaze of glory. Bloody glory.

Jim ran and caught up with the mutant before any of us and started pushing him around.

“C’mon man why aren’t you talking to us? Are we not good enough for you freaks?”

Jim continued to push him well the rest of us harassed him, this was too much. He threw off the old dirty trench coat and faced us. He stretched to his full height. Larger than any human or animal I had ever seen. He simply glared at us with bright green glowing eyes that seemed as if they could melt metal into butter.

He was at least eight feet tall, it also seemed the more afraid I became the larger he grew. With one hand that was the size of a large anvil. The other hand was like a tentacle, only the difference was it was not slimy or slippery. It had bone sticking out of it like a barb-wired fence.

“This is what you get for being what you are, and not being seen for who your really are”. With that he left me, lying there in the street. He put back on the trench coat and lumbered away, as I lie there dying I thought about what had just happened and how it could have been stopped.

“I will save you” he said “but you will no longer be who you are, you will be a mutant like me. You will have no recollection of who you were but you will be changed, and you will be our savior” After he had said these words he disappeared from my vision and I saw a purple light over my chest. The light reminded me of life and the pain subsided, even if only temporary. Glowing faintly and pulsing as if it were alive. My body convulsed and had a seizure well he continued whatever he did, then I blacked out and I now remember nothing of who or what I was, but I know who I am now. I am neither human nor mutant. I am Eternus.

“We had someone run some DNA tests to see if we could figure out who your were, you have been out for at least two weeks” he said, I was now wondering what had caused me to be in a comatose state for two weeks “your DNA matches no one else but a mutant, who we had difficulty treating because he refused medical attention from anyone but the doctor that just died.” This brought back some painful flash backs, but the doctor only watched.

I was scared. I knew humans hated mutants, but there had been recent stories of doctors poisoning them in their sleep at hospitals. I was scared out of my mind. What would happen in the middle of a lonely night at this hospital?

“Eternus? Is that it… just Eternus?” asked the doctor

“Yes” I had little energy and was trying to make my sentences as short as possible.

“Yes?” I asked “is there anything I can help you with?”

“Um, no. Sorry to wake you” replied the doctor, who then walked out muttering.

“Now that’s something that doesn’t happen every day.”

“Where do you think you are going mister?” asked the nurse

“Out” I said “I have had enough of this place and I’m going home, wherever that is.”

“Oh no your not, I’m calling security” then the nurse reached down for the phone, but I had no intention of letting her. I reached deep within myself and found that calm as I had practiced with the roses. I found it struck out at her heart but there was no reaction. I was confused and had no idea why it had not worked, before when I had been recovering it had worked fine, but now the power would not heed my calling.

I didn’t know what to do so I stumbled and tried to run, I got as far as the corner making a sharp turn when I ran into a hazardous waste bin and fell in. I was stabbed and poked with syringes and scalpels until I thought the bin would be filled with blood. I reached for the edge and clambered out, but there was not as much blood as I thought there would be. I looked at my cut body but I wasn’t bleeding. The blood was just staying inside me like it had no plans of going anywhere. I continued running but ran into a guard. I knew I had no choice so I reached deep into my soul, into my calm center and tried again. It worked! I sucked the life from the man in seconds, killing him instantly. As I ran by him to get outside into the free world I grabbed his car keys and saw blood leaking from his body… from cuts and needle holes.

and thats all i have so far. any suggestions or ideas that i could add would be nice. also anything that should be changed.