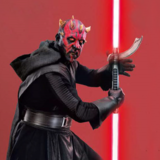 ''The dark side of the Force lives and manifests itself through me! I reach into the dark side now and send ripples through it to all who serve it.... Know that I live!''

Krayt was a jedi knight known as A'sharad Hett in Clone Wars. His father was jedi master Sharad Hett, they lived among the Tusken Raiders (Sand People), while he was a padawan his masters was Ki-Adi Mundi and An'ya Kuro (Dark Woman)

Death of Sharad Hett, by the hands of Aurra Sing.

Padawan A'Sharad Hett and An'ya Kuro in a sparring match...

After some point, A'Sharad Hett encounters with Aurra Sing, who has capable of killing his jedi master Sharad Hett (A'Sharad's father).

Counters Aurra's attack with a kick...

“Padawan A’Sharad Hett—who nursed the pain of his father’s death—beat her [Aurra] badly in single combat. Sing slunk away to fight another day.”

A'Sharad Hett as a Jedi Master in the Clone Wars...

Anakin Skywalker and A'Sharad Hett discusses the usage of the force...

A'Sharad : Even we cannot stop the death.

Jedi Master A'Sharad and Anakin in a mission together...

A'Sharad Hett one of the few remaining jedi knights who has survived the slaughter...

A lightsaber skill & dueling feat for A'Sharad, he held his own against RotS Obi-Wan for a decent amount of time.

And again, hits him with lightsaber hilt...

In the end, A'Sharad loses and Obi-Wan cuts his right arm. However, he proved that he was a worthy opponent for RotS Obi-Wan Kenobi...

After his defeat, he abandoned the heritage of Tusken and became a bounty hunter. At some point he found a Sith temple in Korriban and discovered the Sith holocron of Sith XoXaan...

He wanted to take revenge from Palpatine and Vader, however, he has noticed that it was too late for that and Empire was already falling. (Battle of Endor)

A'Sharad Hett: ''I left for the Unknown Regions, determined to lose myself. I learned that unknown was not the same as empty''

Meeting with the Vong Warriors

After his capture, A'Sharad tortured by the Vong and they replaced his mechanical hand instead of organic one.

Instead of going into the war immediately, Krayt planned for the future, and because of Lumiya & Caedus, NJO fails to give an attention to Krayt...

Krayt: ''There is only one way to stop Abeloth… Jedi and Sith together.''

Dark side of the Force was strong in Krayt, and that darkness was powerful enough to pull GM Luke...

''I can.'' It was a voice that Luke felt rather than heard, a darkness that pulled at him from behind. ''And I will.''

Luke turned to find the form of a shadow-wrapped human approaching from the shore by which Luke had entered the water, the same shore by which all mortals came to the Lake of Apparitions. The silhouette was tall and broad-shouldered, with a head hooded in darkness and glowing eyes that never seemed to match colors, that went from brown to orange and yellow to blue, that sometimes grew dark as ebony and seemed to be not there at all. As the silhouette drew nearer, it began to resemble a man Luke had seen many years before, a man who had appeared only in his dreams-and always shortly before he awoke feeling uneasy and frightened.''

Battle between GM Luke, Darth Krayt and Abeloth goes on ;

''The tattooed stranger stepped in from the left, then slid to the front and drove his stiffened fingers deep into the pit of Abeloth's stomach. A black spray erupted from the wound, and she writhed in pain as the stranger probed for something to grab.

Abeloth loosed a Force blast, trying to drive the stranger off. He held tight. So did Luke, and all three went tumbling across the lake in a snarled mass of limbs and tentacles.''

Krayt can use Force drain, he used it against both Abeloth and GM Luke ;

''Luke did not understand until an eternity later, when the stranger rolled up on his feet and jerked them all to a halt. The Sith seemed to be growing stronger as Abeloth grew weaker, and there were wisps of dark fume swirling off his shoulders and head. It did not take a Jedi Grand Master to understand that Luke was being betrayed by a Force-draining technique.''

''The draining seemed to continue for days; then the stranger threw back his head and screamed in anguish, and it suddenly seemed that only a breath had passed. Shiny black Force energy began to pour from the Sith's wounds into the lake, spreading outward around them in an oily slick so hot the water began to steam and hiss. Still, the stranger continued to drain Abeloth, and Luke realized that he was not being betrayed-the Sith was suffering as much damage from the attack as was Luke

Then she was gone, leaving the stranger and Luke with nothing between them but twenty centimeters of space and the stump of the Sith's hand, now pointed at Luke's chest and still drawing Force energy, draining it not from Abeloth now, but directly from Luke.

They stayed like that for an eternity, a void of cold nothingness growing inside Luke as the stranger continued to hang in the air above, draining him. It seemed to Luke that the Sith's betrayal was premature, that they at least ought to make certain Abeloth was truly dead before they turned to fighting each other but that was not the way Sith did things.''

''The tattooed man stopped and whirled, and Luke found himself preparing to dodge a fork of Force lightning. But the stranger was in no better shape to fight than Luke. He had a gaping wound in his chest, just like Luke, and Luke could see that his entire form was shuddering. Instead of attacking, the Sith just stood staring at them, one eye shining yellow and the other an empty socket, his right arm a useless ghost of a limb.

Then, after an eternity that might have been a mere second, he said, "You must not be so certain of yourself, Master Skywalker. You may think you have stopped the Sith, but you know nothing of us nothing at all."

Krayt kills a couple of Yuuzhan Vong warriors with a powerful Force lightning, which is very impressive because Vong warriors are very durable beings ;

Krayt completely mastered the Force lightning ; He can even use it for intimidation without harming...

Krayt kills dozens of mutants (Rakghoul) with a Force lightning...

Combines Force lightning with Shatterpoint to either heal or kill those who he touches with his hand. Also he learned the Essence Transfer technique.

''Luke and the Sith stranger had been hurling Force attacks at her for a lifetime-or perhaps it was a mere eyeblink-and this was the first time she had shown any reaction.''

''Abeloth loosed a Force blast, trying to drive the stranger off. He held tight. So did Luke, and all three went tumbling across the lake in a snarled mass of limbs and tentacles.''

Krayt hurls Darth Nihl then Force chokes on him...

Krayt breaks Wyyrlok's TK control over the heavy stones and hurls it back to him...

Krayt hurls Cade Skywalker with a Force blast, then vaporizes some of the stone pillars of the Sith Temple...

''I completed training as both jedi and sith. I honed my skills in the clone wars and I've killed thousands of opponents since then.''

Creates a red cyclone with his lightsaber...

Cade hardly hold his own against Krayt, then his mama saves him...

Krayt speedblitzes a few Imperial Knights, they are Force sensitive and trained warriors;

They were no match for Darth Krayt.

Wyyrlok hardly held his own against Krayt.

''The tattooed stranger stepped in from the left, then slid to the front and drove his stiffened fingers deep into the pit of Abeloth's stomach. A black spray erupted from the wound, and she writhed in pain as the stranger probed for something to grab.''

Krayt seizes Cade Skywalker with his one hand only.

Krayt telepathically communicates with Darth Talon and Darth Nihl while he was trying to reborn.

Krayt is one of the most powerful and famous Sith Lords in history.

''Many of the most powerful, terrifying, and notorious Sith Lords through history have been Human or near-Human, including Exar Kun, Darth Bane, Darth Sidious, Darth Vader, Darth Malak and Darth Krayt.''

Krayt is GM Luke's dark counterpart on the Throne of Balance:

"No one whose help you want," Jacen said. "That's the dark man I saw on the Throne of Balance.”

My other Star Wars Threads;