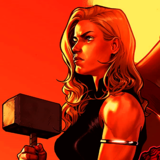 Recognizing that there were missions and objectives that could not be effectively achieved by conventional military forces, Zedracus has been using his increasingly unchecked authority and access to the nigh-limitless resources of the Abyssal Imperium to create a number of irregular forces that would answer directly to him. The Cosmic Corsairs are one such force. Though their moniker may imply that they are a unified organization, they are actually a relatively loosely-aligned collection of pirates, privateers, and other reavers that roam the universe, preying upon any they deem to be weaker than themselves.

Erinys Draconis, the genetically engineered demigoddess, has been appointed the ostensive commander of this anarchistic fleet of cuttthroats. Her overall philosophy in regards to command is “light hand, heavy blade.” Her individual captains are given safe berth anywhere the Imperium holds sway, and are free to pursue their own agendas as they see fit, provided that they do not act against Imperium interests and obey what commands Admiral Draconis does issue. Any who violate or challenge either of these rules will likely find themselves facing her blade.

There is no consistent "application process" for joining the Corsairs; someone who wants to join up simply presents themselves to Admiral Draconis and hopes that she approves. Individuals are assigned to an existing crew (especially impressive individuals may become part of Erinys personal retinue), and crews with their own ship(s) may be attached to an existing sub-fleet or simply unleashed to wreak carnage on their own, depending on how it is deemed they would be best used.