My thoughts on Axis and Time runs out.

Axis. Time Runs out. The Avengers - X-Men War. Siege. Dark Reign. The Acts Of Vengeance. The Death of Wolverine.

During Acts of Vengeance Loki was the assistant and it seemed like no one ruled the Cabal but in truth Loki did. EVERY TIME LOKI TOPS.

During Dark Reign/Siege on the outside Iron Patriot ruled the cabal. If you took a step closer you might even say the Green goblin ruled the Cabal. But if you pulled back the veil of truth, Loki ruled. He convinced Doom into letting Asgard into Latveria and Norman into attacking Asgard. EVERY TIME LOKI TOPS.

Now during Axis. The villains are good and the heroes are evil. “This switch theme” was probably engineered by Loki and (Onslaught) Red skull is just another pawn like during the Acts of Vengeance.

Time Runs Out. While the Avengers/Illuminati War is at the climax, Loki and his Cabal (Dark Avengers, Dark Illuminati) save the earth from the Final Incursion (using Hank Pym the Living Planet) and are deemed as the earth’s saviors. Loki is no longer the Agent of Asgardia but the self-proclaimed king and new All-Father. Loki finally wins and Thor finally loses. EVERY TIME LOKI TOPS. All-Father Loki then sends Angela Asgardia’s assassin to hunt down the Avengers and Illuminati, the villains. You remember how when you kill a hellspawn you get a medal with the Symbol of Hell on it? And how Jonathan Hickman gave each of The Avengers a symbol? Well whenever Angela kills one of these “evil Avengers” she gets a medal with their symbol on it. This would be the plot of the Angela: Asgardian Assassin ongoing series.

BUT, since heroes kinda have to win, she has one last avenger to kill, the master himself, Dr. Strange (A New Avenger). Dr. Strange knew he would fall from grace both times. The first time (during Secret invasion/Dark Reign) he knew he would lose his Supreme powers for a while and they would return. This was a trial he was willing to accept. The second time (Avengers/Illuminati war) his contingency would be the Secret Defenders!!!!!!!!!!!!!!!!!!!!!!!!!! (Yeah pull them out of limbo). Strange would reunite his team Wolverine (A primary Avenger, Death of Wolverine) bringing him back from the dead with his healing factor, Jack Monroe (Resurrected), Julia Carpenter, Darkhawk and the Fraternity of Raptors, and Julia Winters (Jack’s Bucky). Julia Winters would be akin to Jenny Quantum. These themes could drag on for a while culminating into two new series one for Dr. Strange and one for the Secret Defenders probably coming out in time enough to tie-in with the movies.

WELL, LOKI TOPPED FOR A WHILE.

7. Thanos (full-power, but no cosmic weapons)

4. Bart Allen with all of the Speed force

Why Thor can beat Hulk

People always use the Fear Itself #5 but look at it closely, Thor without odinforce (cuz Odin's alive) basically killed Thing and fought Hulk(Worldbreaker) who were both enhanced by the Serpent who gave them thor-like power yet Thor said Hulks stronger. 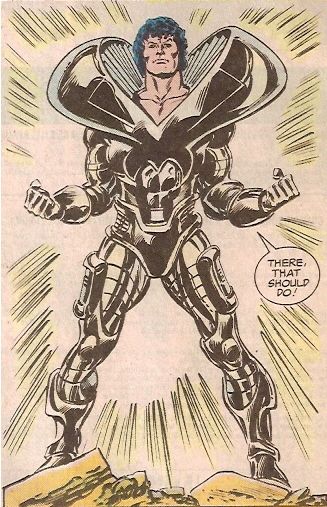