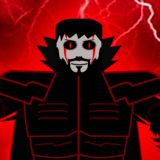 @kilius: Firstly let me point out that you have a Raskta Lsu avatar... I approve... I actually made her respect thread funny enough.

Not true, Fisto was able to just that to two of Grievous Magnaguards: To the rear of the car, where Grievous's pair of MagnaGuards had made the mistake of pitting themselves against Kit Fisto, the Nautolan's blade was a cyclone of blazing green light. Resistant to the energy outpourings of a lightsaber, the phrik alloy staffs were potent weapons, but like any weapon they needed to find their target, and Kit simply wasn't allowing that. In moves a Twi'lek dancer might envy, he spun around the guards, claiming a limb from both with each rotation: left legs, right arms, right legs...

The mag-lev was more than wide enough for flanking maneuver; otherwise Fisto wouldn't have been able to do what he did the bodyguards. Also though not directly stated it can be inferred that the reason the guards were stomped so handily was do to the mobility hindrance; magnaguards would need a similar form of magnetism to stay rooted where as Fisto like Windu can use the Force to retain his mobility.

That's a fair enough point, though at the same time I would counter by pointing out that what a combatant risks by pulling off such a maneuver against a magnaguard is still not the same as what they would risk attempting something like that against Grievous who is a noticeably better tactician, has more blades with which to attack you from multiple angles, is noticeably faster, and it's a fair assumption that the combat computers slaved to Grievous's brain that allow him to analyze vaapad are superior to the ones that would leave the magnaguards helpless against Fisto. Even if he does have enough room to move past Grievous to his side, the narrowness of the train still makes it a riskier maneuver to attempt since you would place yourself in a location where it'd be easier to get BFRed.

The novel specifically makes note of Grievous's hinderance and states nothing of the like to Windu. Mace has the space of mind to wonder whose lightsabers Grieovus's previous kills belonged to and take note of Fisto's battle. Certainly nothing in the text points to Mace's use of the Force to be particularly taxing. It's probably safe to say any Force expenditure Mace has to divert is negligible, where as Grievous's actually matters.

There are also plenty of novels that don't mention a nexus having any role in a fight that is had on one of them, yet forumers will still insist pretty hardcore as to them being very impactful to a fight.

I will say this wasn't one of my stronger points on this thread, but I'd note that while not particularly taxing it's still something you would have to place some focus on as opposed to fighting the other person with a singleminded determination.

At the very least it's certainly something that would make you fight more conservatively and risk less if the consequences of being caught off guard by something are more severe. Take some of the fights in the Bane trilogy for example where one of the characters finds themselves in a position of desperation, such as Zannah when she tripped and Bane pounced on her, or Bane when Kas'im whipped out the dual blades. Both of those situations are situations where the skills the character in such a desperate situation was able to fall back on to survive, however I'd warrant the guess that neither of them would've had the spare focus to pull of a simultaneous task with the force such as what Windu was doing. Or also take into account disorienting physical strikes that have been landed in a lightsaber duel before, I'd wager those could break the attention someone might have on performing a secondary task regardless of how small.

I'm not saying it's something that actively drained Windu, but it's certainly something that would've made him fight more conservatively since the risk of getting put in such a position where you take a physical strike or are confronted by something that demands your full attention are heightened, particularly against an opponent as unfamiliar and unorthodox as Grievous.

Noice thread Joker muh dude. Even though you've only made two RTs they're pretty an gualidy, I mean hell this one was a fun rollercoaster from recognizing the Pykes in the header picture, to learning about a talented Padawan, to seeing a great duel. Good work!

Also the Pykes are badass

Also... was that Hillary Clinton who sabatoged Eldra's ship? KEK

@thesithmaster: thanks the main reason I made this was because I am firmly in the Windu camp of Windu vs Dooku, and Windu's my second or third favorite Jedi, and I got tired of these fights being used to lowball him

@thesithmaster: Yeah same I generally prefer the Sith as well, that's why I have 6 Sith, and only 3 Jedi and a... part timer.