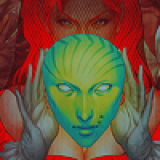 Ellie Knightfalll's breath clouded on the cold night air as snow flakes fell down around her, melting on the tip of her nose and accumulating on the streets of the Upper East Side. Stretching her arms over her head as she secured the Billberry Longchamp purse on her shoulder, the Knightfall heiress slid into the backseat of a chauffeured Mercedes-Benz.

The short black silk Dolce and Gabbana skirt that rode low on her hips slid up her upper thighs as she lounged back on the sumptuous leather seat. Hitting a button, the divider slid up between her and the driver after rattling off the address of an underground club for the elite upper crust of the Upper East Side. Swiftly opening the installed mini-fridge, the precocious redhead grabbed a bottle of Dom Perignon, popped it open and tilted her head back, imbibing in the alcoholic beverage.

As the alcohol coursed though her veins, Ellie turned her head to gaze out the window at the winter wonderland that was New York City on December 25th. Her parents were away doing God knows what and Quintus was on one of his sabbaticals. Ellie had been trained, the same as him, perhaps not to the extent. She was lesser in her parents eyes, not because she was female, but she didn't have the obsessive drive that was inherent in all others. It was why she was spending the year in their penthouse on the Upper East Side - so that her parents didn't have to shamefully look upon her face. Her only company her bodyguard and instructors.

Christmas was traditionally a time for family. In her household, it had only been another day to attempt to further yourself in the pursuit of goals that belonged to somebody else. Tones legs unwound from beneath her as she gracefully exited the car. The passenger side window rolled down as Frankie, the chauffeur leaned over the seat. "Gimme two hours, Frankie." Resting her arms across the opening in the car door, she batted her eyelashes at the middle aged man, knowing it'd have no effect.

"If your brother Quintus were here..."

"If my brother were here, he'd be joining me, or be too busy with his nose either stuck in some historical text or training to worry about little old Ellie."

"If Henri were here..." Her teal eyes narrowed slightly as the corner of her mouth tilted up in a smirk, revealing the subtle dimple there. Henri was her bodyguard and closest confidante, the nearest thing to a father that she had.

"There's a gorgeous necklace at Tiffany's with your wife's name on it, Frankie. And the assurance that she never finds out about what happened to your Christmas bonus if you keep your mouth shut." Sighing at the predictable stubbornness of the Knightfall heir, Frankie rolled the window up and pulled away.

The bottom of her Christian Louboutin heels clacked against the floor of the club as Ellie sauntered in, walking with the confidence of somebody who knew their place in the world. Flipping her hair over her shoulder, her eyes locked onto Hannah Lupos as she lounged against the bar. The 19-year-old daughter of the club's prestigious owner, she had no idea of the club's legacy. Le Tenebra had been used as a front for meetings between affluent members of cults and government groups throughout history.

Through the private office there was a passageway that led to a small storeroom of artifacts, one of which Ellie had her sights set on. Casually leaning against the bar directly next to Hannah, Ellie ordered a shot of Patron. The beat of the bass boomed through the club as provocative lyrics drifted across the air. Hannah caught Ellie out of the corner of her eye while Ellie played coy. Ordering a cocktail, she slid her finger around the rim while exaggeratedly pouting, swiveling her hips from side to side while leaning over the bar.

Forward as always, Hannah grabbed Ellie's hand, put her drink down on the counter and lead her off to the dance floor. The two young women moved to the frantic beat of the music, lost in alcohol, the frenetic energy and the want to let loose and have a good time. Hannah's lips drifted down Ellie's neck, tracing the line of her collarbone as she slowly led her back towards one of the private rooms.

Ushering her over to the couch, Hannah slid on top of Ellie, twining her fingers through crimson hair and slowly taking the time to kiss a path up from her slightly pronounced collar bones to sumptuous lips punctuated with a beauty mark. Drawing her lips away, Ellie drew Hannah's face back, re-positioning their bodies until they were curled into one another in a half-sitting position, legs entangled.

Reaching behind Hannah, Ellie slid her hand beneath the loose silk of her shirt, drawing her fingers across her spine until she reached the center. Crooking two fingers into a hook, she moved speedily and dug them in, effecting the nerve cluster there. Teamed with the nerve she simultaneously pinched in Hannah's neck, the raven-haired heartbreaker would be out of commission for several hours.

"Sorry, darlin'." Wiping the smeared lipstick from the corner of her lip while she straightened her clothes, providing some semblance to her meticulously crafted appearance, Ellie walked over to the opposite side of the room. An authenticated Van Gogh hung on the wall, the gaudy frame overshadowing the simplicity of the oil painting.

Sliding it to the side, she flipped the switch that would open a private entrance into the cache of artifacts stored beneath the club. As the panel in the floor beside the antique mahogany captain's desk opened up, Ellie swiped a letter opener off of the pristine surface and slowly descended into the cache.

As her eyes adjusted to the dim glowing lighting of the open room, Ellie made a beeline for the cabinet in the corner, the one with the clear glass front, revealing the tantalizing display of bladed weapons inside. In the center of display, theatrically lit from both above and below was a dagger widely regarded to be the one used by Marcus Junius Brutus in the assassination of Julius Caesar himself.

Reaching into her bra, Ellie slid out a glass-cutter. Attaching it to the cabinet, she de-triggered any sensors and cut open a wide enough hole to reach in. Nimbly grabbing the dagger and sliding it into the clutch purse she'd brought with her, it was only a matter of minutes before she was scott-free out of the club.

Climbing into the car that arrived just in time, she toed off her red pumps and rested her legs on the extended leather seat. "Not a word, Frankie, not a word." The rest of the ride passed in silence until she disembarked from the elevator that had delivered her straight into the foyer of the luxurious penthouse that she was occupying.

All the splendor in the world, anything that money could buy, and it felt empty. Quintus was out of the country, Kincaid was off at some boarding school for the holidays having fun with friends and here she was, all by her lonesome. Stepping out of the criminally short skirt, it fell to the marble floor of the foyer. Dropping the shoes that she'd carried in on the plush carpet of the grandiose living room, there was a trail of garments beginning to compile, leading a path directly to her bedroom.

Pushing in the double doors to her obscenely large bedroom, Ellie stripped the black bustier off and dangled it from her fingertip before it cascaded to the floor. Unceremoniously stepping onto the padded chest at the foot of her California King bed, large enough to comfortably fit about five people, she fell forward, belly-flopping onto the silk duvet.

Unfastening the clasp of the Kate Spade clutch, she pulled out the dagger, weighing it in her hands as she laid on her back, hair strewn out around her head. "Merry Christmas, Quintus." Flouncing over onto her stomach, she carefully placed the historically significant weapon into her bedside drawer and closed it, quietly turning the lock and securing it.

Shutting the light off, she curled up beneath the covers in the center of her bed and attempted to prevent her mind from wandering. Holding the body pillow that had become her constant companion close beneath the soft Egyptian cotton sheets, the Knightfall Heiress, Daughter of Destruction, drifted off into yet another restless sleep.