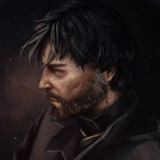 Hair: Dark and starting to grey on the sides.

Species: Cainite (A Descendant of Cain that has inherited the Mark of Cain. For centuries, the species had been used by the Church in it's hunt of the witch, the heretic, the demon, and other supernatural monsters do to the species's resistance to supernatural afflictions, and magic.)

Distinguishing features: The majority of Vincent's body is covered in scars that he received during augmentations, training, and in the field. Has acquired noticeable facial scarring following his encounter with Charlemagne LeBeau. Has red celtic runes engraved on his right arm. The runes fade when the Ill fabled Lance, Gáe Bolg is summoned.

Occupation: Head of the Conclave. (Considered his tenure as The Raysh Al Shaytan to be false, restructured the League of Shadows who chose to follow him into The Conclave. Is in the process of stepping down.)

Family: All deceased on his father's side. Has an infant daughter named Olivia.

The Mark of Cain - The Mark grants Vincent a tremendously accurate vision and the ability to read and predict practically any movements his opponent could make as well as the minute details of his general surroundings. The mark also allows Vincent to record and store the physical movements and combative styles of peak-level humans as well as detect mana, chi, chakra, and energy fluctuations within a opponent's body. While his eyes are capable of reading and predicting any situation, his body is often unable to keep up with those individuals blessed with with superior attributes (Examples, Ziah Darkson, Garrison Grail, and Rafel.) Even though he theoretically could predict their movements, his body wouldn't have enough time to react against them. Unfortunately, The Mark craves death. Often flooding the body with endorphins after the user kills someone. The more said Cainite kills, the faster he heals, and the quicker his stamina regenerates. The Mark has been known to take control of it's wielders, often forcing them into fits of murderous rage. At one point in time, Vincent was blind while the Mark is dormant. In order for a Cainite to fully awaken their Mark and gain complete control over it. A loved one has to die by said Cainite's hand. Vincent has awakened his, and now has full mastery of it. With a mere glance, Vincent can now see how much blood stain's an individual's soul. Also, when in close combat, If Vincent locks eyes with his opponent, he can induce self-mortification by imposing on his opponent every negative action, behavior and sensation, from said individual's past sins.

Gáe Bolg -The Barbed Spear that Pierces with Death. - An ominous spear (or lance) that gained sentience, and was once wielded by Cu Chulain of the Ulster Cycle. It recognized that Vincent was a descendant of Chulain from his mother's side. Thus, the ill fabled lance awoken and allowed itself to be bound to Vincent. The spear can also retract itself to be used more like a short sword, or long knife in close quarters combat. If anyone other than it's wielder were to try and use the Lance, hundreds of barbs would extend from the shaft in an attempt to maim the false hand that held it. Often times, a wielder would allow an enemy the chance to use the weapon against them in an ill fated set up. The barbs can be activated at the telepathic whims of it's user. It is considered a death sentence to even be struck by the Spear.