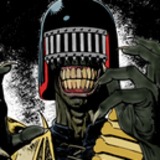 Just encase I'm not the only person who gets confused by a 48+ year episode guide....
Start the Conversation

What are the Funniest Comic Ads ones you've ever seen?

What Hero / Villain do you wish was never replaced?

As of this... Decade, a lot of Heroes and Villains in Comics have been replaced by lesser characters in order for them to get more development, like Eddie Brock ceasing being Venom, or Bruce Wayne as Batman... Which got me wondering, who would you guys personally want back?
Out of everybody, I want Ted Kord back... the new Blue Beetle sucks.

Who else thinks the DCAU should make a Comeback?

It was indefinetably the best thing to happen to DC Comics Mythology. There's absolutely no just reason it should remain canceled...

Why? Because he Deserves one.

Who here has Watched "The Ultimate Warrior"...

...And thinks battle forums should work more like that?
I'm just spit-balling here, but i think deeper analizating in how characters would fight/react to their opponents in an actual battle would make these Battle Forums much more accurate. Who's with me?

Also, Just to Creep you out - In this Episode of Batman Beyond, Ra's Al Ghul Made out with Batman inside his daughter's body.
5 Comments

Can Any of the Following things Kill Deadpool?

~ Being teleported to the center of the sun
~ Being torn apart in tiny little pieces (like, sushi sized pieces), and being scattered all around the multiverse so they can't regenerate
~ 2,000 Hours of Watching X-Men Origins: Wolverine
~ If the Entire Comic Book industry exploded
~ if chimichangas were erased from existence with only Deadpool's knowledge of it
~ Being Blown apart as a Baby by a Time Traveling Thanos
~ if the Anti-Monitor completely absorbed the Matter he's made from
~ if his entire Fanbase was blown up by the Death Star
~ Or, if Justin Bieber cameo'd in the Deadpool Movie, and he was completely aware of it.

Which Do you think Fits Spidey Best?

Why Hasn't Anybody Killed This Guy Yet?

Other Than His Massive Fan Base, He Has Nothing for him in the Realm of Comics... I Mean, he kills people at random and Should have Been killed Himself ages ago.
Think about it.

Why Does Batman Fight For this Freak's Life? Jason Todd deserves the Honor of Taking him out, But For Some Reason above all of Jason's Other Victims, Batman Protects the Joker from Death. Why?