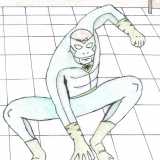 Things I would like to see in the New 52

With the New 52 eight months in I thought I'd post a few things I'd like to see in its future.

I would like to see Shazam get his own title after his origin re-imagining is done in The Curse of Shazam in the back of Justice League. This would only happen if the character proves popular enough but I would be more than happy to see fresh takes on his villains as I see a lot of potential there.

Personally I'd like to know where Stephanie Brown is, the status of Tempest, Aqualad, Tula or Lorena Marquez. Wally West should make an appearance at some point and there are still a wide range of villains that need to be explored in the new continuity. With Aquaman I'd like them to revisit some classic villains that haven't appeared since his first volume such as O.G.R.E. and Xen the Aquarium Owner but I won't hold out hope for either of them.

I'm not a huge fan of the artwork in Wonder Woman, a bit too cartoony compared to other titles, even though I'm loving the character designs a lot of the artwork falls flat in my eyes.

Do you agree with what I've said? What would you like to see? Sound off below in the comments.

I've tried to upload a picture of Billy Batson from Justice League #7 and it's not showing up in my image submissions. This probably isn't the place to put this but if anyone can let me know why that'd be great!

Blogs Created:
2 blogs
Most Commented blog:
Things I would like to see in the New 52
Total Comments on blogs:
24 comments