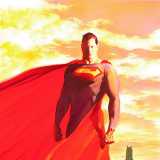 Some Ideas For How To Approach the Justice League Film

So as Marvel's the Avengers assembled to the big screen and and was not only a fantastic film but the culmination of almost six years of careful planning and cinematic universe construction becoming a box office giant that would make Hank Pym proud, Warner Bros. has announced they have begun developing a Justice League film. By developing, they just hired a screenwriter, by the name of Will Beall (he wrote 'Gangster Squad' if that helps) to bring the Trinity of Superman, Batman, and Wonder Woman (plus additions) to a theater near you.

To some this is great news, to others this is Warner Bros. grabbing at the mountains of money the Avengers are currently counting in Stark Tower. Either way, it was bound to happen. Rumors are circling as to how exactly they are going to go about bringing the ensemble together; will it be a shared universe? Will Ryan Reynolds return as Hal Jordan? Will they be fighting a giant starfish from outer space (okay maybe not the last one, but they would get big up's from me if they did). I can't answer all of the rumors - or any for that matter but I can give my thoughts and personal 'What I'd Do' on the project.

If rumors are to be believed the upcoming Man of Steel starring Henry Cavill as Superman i.e. the Pantsless Wonder, will be the first building block of a DC Cinematic Universe. That is a good idea, Iron Man kicked off the Marvel Cinematic Universe with a delightful bang and Man of Steel could do the same thing. Depending on if it sucks or not - I'm not going to judge the movie yet though, but I'm not expecting anything good to come of it. Before you say anything: Shut Up, the suit looks like crap, and I don't trust Zack Snyder as far as I could throw rocks at him. Anyway, it does make sense; Superman is the first of the superheroes and he does deserve to have the top spot.

However if Man of Steel bombs, Warner Bros. will scramble to do something to rectify that; it's true, their handling of Green Lantern kind of proved that. So personally what I would do, especially if they want to make a solid universe, is make a 'World's Finest' movie. A Superman and Batman team up could not only introduce two major JL members so you can move forward with the others, but give the audience a sense of the universe they intend to explore. This would be quite handy if you made the film set before the formation of the League and set it up so by the end Superman and Batman decide "Hey this whole working together thing is not a bad idea" so they set out to gather others for a team; allowing them to make Tony Stark-esque cameos in other follow up movies (together or individually).

It wouldn't be that difficult for people to accept a World's Finest movie either. Everyone knows who they are - the blue one is from Metropolis, the pointy eared one is from Gotham. One is an alien, the other is a lunatic. That one fights a bald businessman, the other fights a clown, and so on. So we don't have to go through another origin film for them. Personally I'd be way more excited for a World's Finest movie than another Superman or Batman movie, just saying.

Another rumor I've heard is that Man of Steel would lead into a Justice League movie that would then have spin-offs (i.e. the Flash, Wonder Woman, and the Batman reboot). This is a good and bad idea. On the plus side; they wouldn't have to wait so long to actually get the movie made, audience reactions could show them who would and wouldn't get a spin-off movie. But on the other hand; part of the fun of what Marvel did was anticipating the Avengers, seeing all those heroes before they came together and actually building a world that more characters from comics can be adapted to fit into. It was also great fun to have all those Easter Eggs and little cameos that, I as a fan, savored and absorbed and wondered how they effected the greater universe. (Seeing Thor's hammer at the end of Iron Man 2 before even knowing what was going to happen in Thor is a good example of that). Then again this is just a rumor and they could very well be starting up the engines for the Flash and Wonder Woman, which I prefer they do. It's about time they got their silver screen debuts.

That brings me to who should be on the team. Now a lot of people probably want the original seven (Superman, Batman, Wonder Woman, Aquaman, the Flash, Green Lantern, and Martian Manhunter - for those that don't know) to be in the film. That's completely understandable - they are the Justice League, but I wouldn't go that route; seven is too unwieldy, too many personalities, and it would be hard to equally divide screen time for seven major superheroes. I would go with at least five; that's right Martian Manhunter and Batman are on my chopping block. Honestly I'd save Batman for the Justice League sequel - if I could, assuming movie executives hadn't pummeled me with baseball bats for even thinking such an idea.

Onto my next piece; that isn't a rumor, actually. According to Mark Millar (of Ultimates, Wanted, and Old Man Logan fame) hearing from a guy who knows a guy who knows Will Beall, the WB's take on the Justice League will be "dark and mature" and "very real-world". Egh. Now, assuming that that is accurate, that's awful. Listen there's no shame in taking a lot of ques from the Avengers; what they did was make a cinematic comic book reality. It wasn't a grim and gritty, 'This Is the Real World', dull, colorless reality. It was one were absolutely unrealistic things happened and it was fun and vibrant. The Justice League; more so than the Avengers, should be in a world like that. Their costumes shouldn't be an endless barrage of dull body armor and leather, they shouldn't come together to be a government task force, they shouldn't reveal their secret identities to the world, they should be the Justice League. I don't mean be completely unrealistic, sure there has to be a fair amount but it should be 'Comic Book Realism' and not 'Real-World Realism' if that makes any sense. They should act like heroes, they should be heroes, and we love them because they are heroes on a scale that doesn't exist.

But I am currently done talking on the subject, till next time.