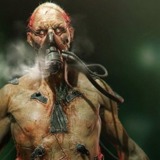 Those who still have their lives can go, but leave your limbs. They belong to me now.

Split personality, the best of two worlds. Two identical minds stuck inside the same body. One of the world's most brilliant scientist turned into his greatest creation. Another possessed by satanic rituals caged inside the toxic husk. The Doctor And The @mother

Of course you don't have to believe any of this. I'm just an insane crazy man to you right?

Doesn't matter if i'm lying or not...You're still stuck on this planet with me.

Turned Into His Greatest Creation