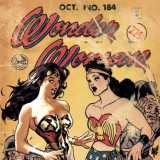 Though I've been critical of this run in the past, I thought it ended up being fantastic... until this final issue. It didn't anything to spoil what preceded it, but as a finale it was extremely anti-climactic to me. The Poseidon twist (which really caught me off guard at the end of the previous issue) gets resolved in just a few panels, then everything plays out in rushed and predictable way.

I didn't mind Diana's actions towards First Born, but I wanted a more climactic showdown after three years of waiting. The Athena thing was interesting, but we've all seen Zeke as Zeus coming for months (or years). All in all, it felt like a rush job - like they really needed another issue or two to really maneuver through everything they'd spent three years setting up.

I'd have to go with "Eyes of the Gorgon." It showcases Wonder Woman's drive and wilingness to sacrifice so beautifully.

I can't wait for this comic. Lynda Carter was my introduction to super-heroes. I just hope they capture the spirit of the original. It's so nice to have four comics featuring Wonder Woman - she might finally be getting her due.

I was excited about the concept for this series, but this was really bad. I know they'll have new creative teams, but why start on such a sour note? The art really concerns me - you'd think they'd kick off the series with the best they've got, but this was horrible. In that first shot of the Wonder-angs (which are so, so, so stupid) her breasts look like a pair of boxing gloves hanging from her neck.

I also don't understand why the story is in Gotham. Again, this is the first issue - it would seem to me it should showcase Wonder Woman. I'd be fine with a story in Gotham later, but in the first issue it's a terrible choice. There is also a huge lack of consistency - Oracle calls on Wonder Woman precisely because of who she is (thus she rejects Flash, Green Lantern ("too cosmic"? Really?), and Superman) then expects her to not be who she is.

I normally like Gail Simone, but she's proven before that she can be prone to some real stinkers. This might be the stinkiest of all.

@csg_cl: Couldn't have said it better myself. This thread comes up quite a bit, and what @csg_cl definitely represents the general consensus.

@jaken7: I couldn't agree more. If she has to have a love interest, it should be Steve, but I'd prefer it if she was just an independent woman, like, you know, an Amazon.

I'm guessing Circe, though who knows. Circe would be a good bridge between Azzarello's heavy mythology and something else. We know the Swamp Thing is involved somehow - maybe Circe (who uses herbs and the like and, in Greek mythology, liked to turn people into animals) is connected to him somehow.

Of course, all we can do is speculate. I just hope it doesn't suck.

@csg_cl: I didn't mean "new direction" in the sense of retconning or anything, just that they (the Finches) seem to want to leave the mythology behind in favor of more interaction with the DCU. Given where Azzarello seems to be leaving the story, it seems to me that that's going to be a tough transition to do gracefully.

I have a hard time imagining a scenario in which the Amazons have just been through an epic and traumatic war, Diana has become the God of War and nearly died at the hands of First Born, Zeke and Zola have... whatever happens to them, and the Greek Gods resolve their massive conflict, only for Diana to say, "Cool, glad that's dealt with. Now you all have fun rebuilding while I hang out with the Justice League." It's a pretty massive tonal shift that would be hard for even a great and experienced writer to pull off and, as we know, Mrs. Finch is anything but.

I guess I thought it was Diana in the clay body because Chiang made it clear that Wonder Woman's blood is trickling into the pool of blood on Mt. Olympus. First Born, the Minotaur, and Cassandra all "teleported" to the battle by going into that pool, so I assume Diana's blood has been similarly "teleported." My assumption was that, without a body to hold the blood it went into the statue. I could, of course, be wrong - we'll find out in a month or two.

On a slightly different note, it's weird to read this knowing that Finch is about to take over. The stakes here are so high, yet we know Finch is going to go in a completely new direction. I hope Azzarello doesn't have to pull back from his intentions to give Finch an entry point, that would be a huge disappointment.

That's a good point about the amount of stuff jammed in (JL and Swamp Thing). Again, it doesn't bode well for the writing.

I guess I don't mind the younger look. Azzarello established her as being quite young (23, if I recall), but she never felt that young in either her actions or her look, which always bothered me. So maybe Finch will be a bit more consistent in that regard.

The writing though... I'm bracing myself for the writing.