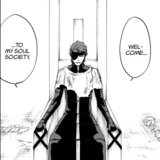 LOOL why are you pixel scaling of off that image my guy? Use another one.

And when you’re done with that one, use another one that is entirely different in size.

And when you’re done with that one, use the next one.

You see how stupid this is? Utterly insane and silly.

We go by the 10 day walking statements, because it is consistent with the fact that there are mountains canonically inside Seireitei, both in the novels AND in the manga, takes an incredibly long hike to cross from district to district in the novels, and thirdly because the images are inconsistent. All of them.

I’ll compare it to this. We already know Kubo is inconsistent with his illustrations, so using ONE of them as reference is like using a formula in maths that you know is wrong to calculate something.

If I pixel scaled the Naruto planet using this ‘large planet’ thing that has been conceived, The Juubi would be the size of the United Kingdom. Stop this incredulity.

Nailed it. This is why pixel scaling is dumb and should never be used unless the author explicitly states they use pixel scaling for their illustrations.

Pixel scaling isn't valid. Time scaling relies on assumptions but at least those assumptions are based on something more concrete.

@diydeath: you quoted my post. That’s exactly what I wanted you to do. Now, look at the original post again and notice that I edited it. Now look at your post… my edit is NOT in your post, even though you quoted it.

Now go read your old posts of you quoting ProfessorRespect - and read them thoroughly - and you’ll see that he didn’t edit shit in, and he told you from the get go where to go.

You're right, I was wrong. I was just pissed off that someone would link an entire respect thread instead of grabbing the scans and linking them after being confronted about that 3 times and didn't read carefully after. In my mind, that told me everything I needed to know right there. The podcast bit was my fault, rest still stands though.

@diydeath: he told you that it was at the 45:00min mark repeatedly. We can all see it. Across multiple posts. We can also all see that you QUOTED him saying that - because of the way ComicVine works, if I post something and you quote it and I go edit it afterwards, your post will not reflect the edit. This means that we can all clearly see that you either ignored or didn’t see him telling you that repeatedly, because you quoted him.

. Actually...I could have just had enough after the refusal to just post scans instead of linking to a lengthy respect thread. Yeah you're right. 2nd part was my bad, 1st part was Respect's bad.

I'm confused as to what the problem is. Very onesided

Problem is Respect's proof was linking to an entire respect thread

That's just lazy and we should have rules against doing crap like that. Edited because I was wrong about that part.

@diydeath: First, we mods don't get involved because someone's not providing evidence at the level you like. That's not our job. Second, it seems to me that he did actually provide evidence on two occasions, first by linking to a respect thread with info on the subject (post 51), and second by linking to a podcast and specifically saying what time to start listening (post 55). Yes, you may have to do a little extra work getting to the evidence. There's nothing wrong with that.

They edited their posts. Originally there was no indication of what time to listen at and linking to a page filled with scans without stating what to look for is the same shady nonsense lawyers do when they want to bury the opposition in crap.

At best it's poor form and at worst it's malicious (my money is on malicious given the edits and refusal to provide proof in a reasonable way (scans) multiple times). Want to know why this place is half dead and isn't getting more users? It's because this kind of nonsense is allowed. Maybe you and other staff need to revisit those rules and think about how to encourage people to actually link to the proof being requested instead of being obtuse. It would go a long, long way to fixing stuff like this and would be beneficial to the battle section as a whole.

They're not edited, you just didn't read them fully--as can be clearly seen by your later comments where you still don't see the time to start listening. I found the scans on the RT in about a minute. Maybe try to be a better member of the forum yourself before pointing at others.

"Maybe try to be a better member of the forum yourself before pointing at others."

Excuse me? Get the head moderator here. Now.

You don't link to an entire thread of scans and call it a day when you make claims.

I think Warhammer 40k wins - primarily because it's not just the Imperium in play here. You also have Necrons, Eldar, Orks, etc.

Orks alone can be problematic enough to threaten Terra and have done exactly that in the past with their war moons and whatever the name of their super Ork breed is, the ones who make Primarchs look like pre-roided out Carrot Top. Necrons have a navigation tool which lets them explode stars remotely never mind the ctan shards. Imperium I feel would be mostly irrelevant except for some of the crazier Dark Age of Technology they still have. If I remember right, for example, there was one Adeptus Mechanicus ship which had a weapon that time travelled it's target fractions of seconds into the past and overlayed two copies of the same thing in the space area for some crazy temporal destruction and so forth.

People really, really underestimate how broken some of the Dark Age of Technology weapons are and Necrons in general.

And of course there's the Chaos Gods which would be hugely problematic inside The Great Rift and how their Daemons are virtually endless in numbers since they don't technically die when they're killed.

@diydeath: authors generally indicate time it takes for normal human beings when they write something like- "it takes 5 days to get there" and such. And I don't think Kubo would consider Shinigami's walking speed writing this statement.

Plus, there's not much difference between Shinigami and normal human walking speed. The difference is only there in running speed.

I mean, shouldn't walking speed be the same? Because its a walk, they are not in a hurry.

Forum ate my post (yay). Basically the jist of what I was saying is it's all assumptions based on interpretations. I'd be much more inclined to believe Yoruichi, written by Kubo than pixel scaling though since the pixel scaler isn't involved with Bleach publications whatsoever.

Peter would be more physically fit, probably but never underestimate the crazy skinny dude...my bet would be on Hitler going 150% immediately and overwhelming Peter with ferocity.