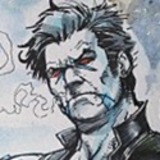 "Someone order an extra-large pepperoni?" 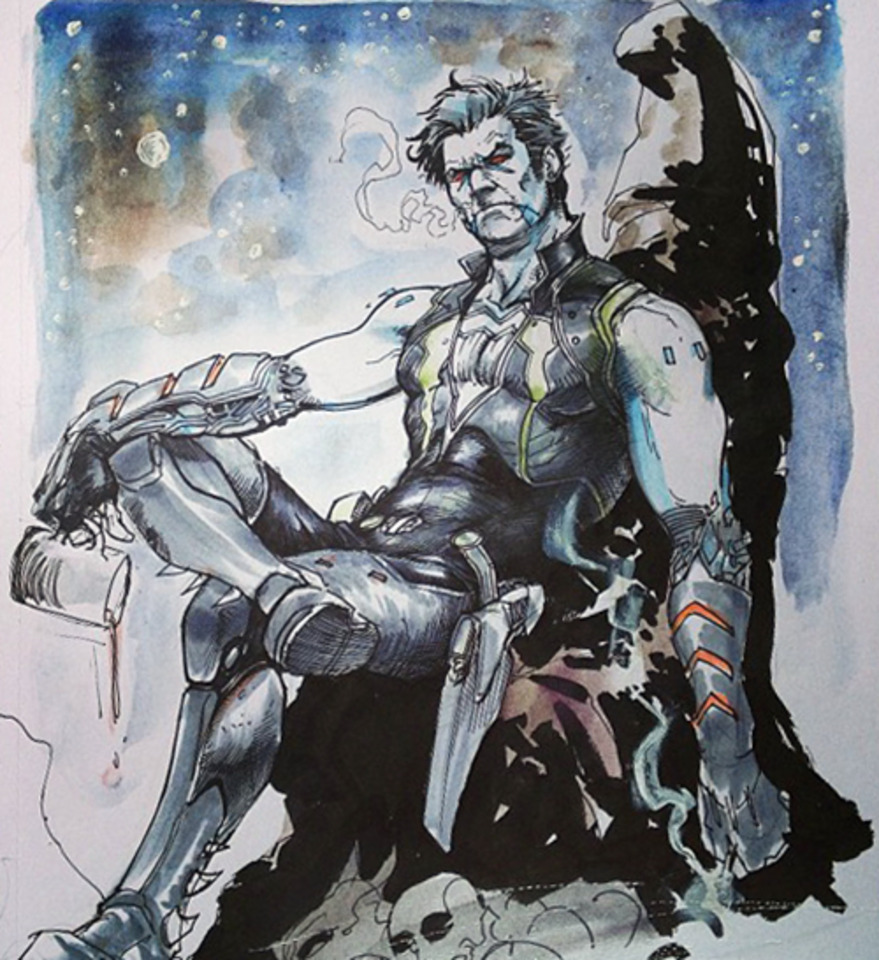 Dirge comes off as a tall, well-built albino wearing a wig at first glance -- his skin is chalk-white and his eyes are a deep, lusterless red. A mop of tousled dark hair covers his head, and at closer inspection, pale streaks of sky-blue can be seen across his face. Some manner of tribal markings, perhaps.

An ex-inhabitant of the planet Dynaeus, Dirge took a "human" name upon coming to Earth but is certainly of alien origin. Bleeding deep purple and dressed in a snug and stylish (yet efficient!) suit of black liquid armor, he's laden head to toe in various weapons, ranging from guns, to ropes, to blades, to chains, to hooks, to grenades, and everything in between. He's a lightly-armored walking alien arsenal seemingly designed for the hunt, and for close-up combat.

Condescending, gruff, belittling, and a bit of a flirt, Dirge is the ultimate unintentional bad boy, claiming to have invented the "compliment put-down." His thirst, however, is for the hunt -- and while he may be a vicious, destructive, uncaring bastard, he's a man of honor in his own very special way. Unlike most noble bounty hunters who will never go back on a deal, however, Dirge holds few loyalties to his employers, especially if he doesn't like them. Totally content to switch sides for a better paycheck or a less risky job, the dynian is about as undependable as he is coldly, utterly, efficient.

Dirge has a wide and adaptive skill-set focused on hunting down marks. This rarely includes taking anyone in alive, but it does frequently include taking down people who get in his way. On top of a shocking level of intellect, Dirge's alien physiology gifts him with amazing strength, speed, durability, and a regenerative healing factor that relieves him of injuries nearly instantly. Both a gifted swordsman and shootist, Dirge specializes in using all of the tools at his disposal as a single unit, and tactically approaches most encounters by weakening his mark from afar, then getting close for the kill.

Though his exact limits have not been tested, Dirge appears to be immune to telepathy. It has been confirmed that this is not a trait of his species, and appears to be attributed to his mind specifically.

Dirge's great physical power comes from the presence of oxygen, an element non-existent on his home planet. When it reacts with his body and permeates him, it grants him amazing strength, speed, and the power to heal wounds nearly instantly. If this chemical is blocked, inhibited, or in some other way removed from him, his physical statistics are reduced to those of a normal man of his size and fitness.