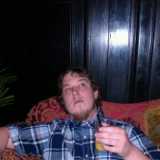 Revenge of the nerds & Beer

How could you go wrong?? I was playing some black ops, red dead, and many other games. Tossin' back a couple nice IPA beers, i get the hankerin' for some netflix. i put on Revenge Of The Nerds which i haven't seen i yeeeeears. Hilarious! Funnier than i remember. We got Revenge of the nerds fans out there? :D
Start the Conversation


When this issue of Blood Syndicate #8 came out i was 7 years old. Wandering around outside building tree houses, running, jumping, skipping like a circus monkey.. okay bad example! Haha, Remember when kids played outside?? RIGHT?! Okay, getting off topic. I was getting into comics then and i do believe i was getting into Uncanny X-men, Batman, some Ninja turtles and Simpsons comics sprinkled here and there. Maybe the occasional Archie.
Now it's 2011 i am almost 26 years old and for some reason i never heard anyone talk about this comic which is Blood Syndicate. Blood Syndicate stopped being released in 96 and was it because it's got that whole X-men, Fantastic four vibe and people just thought it was a rip off? Because they only released like, a little over 30 issues. Was it because the comic simply was not doing well? I thought the comic was cool. I like how they utilized scribbles for curse words, and you would read it and you knew exactly what words they were saying like "MF" and words of those nature.
So, What does this all mean you ask? I am thinkin' i am going to get #8 & up and see how this story ends up and if i like it, i'll try to complete my collection because hey, i could complete this collection far easier than my Wolverine collection! :D
5 Comments


Well first off, i got a sh1t-wack of comics through TFAW.com. Gotta love their grab bags! I got the three issues of Blackest night: JSA and the art in it is superb.. it's dark, thrilling, yet confusing to me...... i dont read JSA or Blackest Night series much. accept for the darkest night superman #1 which i enjoyed. In these three issues i was struggling to figure out what exactly was going on. I ended BN: JSA #3 and it said continue on to Blackest Night #8 for the "Final Battle"
I wouldn't mind reading it to figure out what happens but i also want to know why all this is happening....... Can anyone fill me in?
8 Comments

i liked this!!!!
I haven't read a comic book that utilized the word "MOTHER FUCKER" in so many ways. haha. i might have to go get the Scalped TPB and find out what happens to "Bad Horse"

If any of you have read the other issues.... let me know what you think!
2 Comments


This story is bizarre... through out the whole read i was just like "Whaaat-Tha-F!#?!!"
Why can't more comics be like this? I like reading a comic and thinking while reading "This !#$% is weird yo.."

SPOILER WARNING: Click here to reveal hidden content.
THE PART WHERE JOHN AND THE TRIBAL CHARACTER CHEW THAT PSYCHOACTIVE SUBSTANCE TO FIND OUT WHAT HAPPENED TO THE MUTE KID AND THEY SHOW THAT 2 PAGE COLLAGE OF JUST TRIPPYNESS.. I LOVED THAT!

My question is... WHERE ARE ALL THE OTHER COMICS THAT ARE WEIRD AND TWISTED LIKE THIS?? I've read some of Danzig's comics by his company Verotik, i know about those twisted comics. I read Rob Zombie's WHAT EVER HAPPENED TO BARON VON SHOCK.. I liked the story line with the debauchery when the character becomes famous. what else is out there?? maybe someone can suggest some comics! thanks! -DIGITAL BLASHPHEMY (Comic fiend/Forum Rat/Reviewer)
1 Comments

I went into the comic book store wendesday june 9th and i got my usual comics that came out that day and i ran across. THE LAST CHRISTMAS #1 i was going to order this online awhile ago and it was there at the store so i grabbed it with a quickness!
It's hilarious. it makes you laugh yet makes you feel Santa's pain... i don't want to spoil anything but if you can get your hands on this issue. you'll know what i mean. its funny and gory all at the same time. I love Brian posehn's work. his comedy and he really seems like a down to earth cool "geek" :D
I definitely have to get the rest of this series.......

My question is to my fellow comic-fanatics.. if you read this.. what did you think? and if u havent, go get it and let me know.

read the new Spider-Girl #2 it was pretty good. i got Batman #700 which i phuckin loved. bought a X-Men #1 (1991) for a buck today aswell think i might start dippin' into that series being that i'm not feelin any of the X-Men comics that are out right now.. OH!! and i found LAST CHRISTMAS #1 at the comic shop i go to. i was stoked.

What ever happened to Baron Von Shock? #1 by Rob Zombie

Read WHAT EVER HAPPENED TO BARON VON SHOCK #1 by Rob Zombie.. haha, i liked it! the art was killer. the dialogue was raw and vulgar. my kind of comic.

Just picked up Rob Zombie Presents: What ever happened to Baron Von Shock?  (Haven't read it yet)

Apparently Rob hasn't put out a comic in some years... i haven't read any of his comics nor Baron Von Shock yet, but i definitely want EL SUPER BEASTO and the Spookshow! i already know it! i'm a fan of Rob zombie's work.

THE FLASH HAS A NEW FAN!

I like where the story is going! (granted the story idea has been done in a movie, but hey i enjoyed these issues) it was very easy to just get into. I don't read flash at all. the most i knew about the flash was he ran fast and his name is Barry Allen.. that's about it. LOL, but i dove right in and enjoyed the character, the writing wasn't cheesy and i was kept interested. that's important to me..... it's got to be interesting, it's got to have NON CHEESY dialogue, Great art is always a plus and some humor.  if you don't read FLASH and you're curious.............. GO PICK UP ISSUE 1 and 2 of Brightest Day FLASH. i gotta thank that teen for turning me on to the flash.