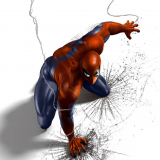 If so yes, he is a pretty sensible person.

Rocket Raccoon is honestly something I'm most looking forward to seeing.

I just hope they have a good balance of comedy, action, and drama. Marvel has been overdoing the comedy lately.

Second that, the final battle of Thor 2 and Iron Man 3's overuse of comedy is getting to me as of late. I think they can make movies appealing to kids too without making it overly cartoonish and goofy. It's spoiling the quality of their movies.

I would prefer him as Black Adam.

Where is that Man of Steel picture from for best script. I love the pulp aspect of it!

While I really enjoyed Man of Steel I don't think it deserves to win Best Script (and by extension Best Movie). The script was just a complete and total mess. Poor pacing, poor structure, just completely amateurish on Goyer's part (Then again that is how I find most of his work). All his characters do is speak at each other, never to each other. They give big monologues but there are never real exchanges between them. People don't speak in speeches. It just created a huge disconnect for a lot of viewers.

He tried to copy his success of Batman Begins but it doesn't work with this movie. Put them side by side and they have almost the same progression. One of the biggest issues here is the flashbacks. Just like in Batman Begins he tries to use flashbacks to flesh out Clark as a character but here they are just hollow. They are poorly placed and don't have anywhere near as good as a mechanism to call to a flashback like Begins did, and they only ended up hurting the pacing and flow of the movie.

While I think that Guillermo Del Toro or Peter Jackson deserved to win for Best Director I can't deny that Snyder did a great job with the poor script he had.

I agree with this fully. Smallville fight was a better fight in terms of action and intensity IMO.

@baltoro: I think with regard to the falling oil rig that he wasn't KOed or anything, just worn out. Remember he hasn't fully developed or honed his abilities.

He didn't get knocked around by bullets -nam-ek was pushed back but not injured at all. MOS took a bullet to the forehead in one scene without any damage. As for the entire battle itself -

In terms of this battle I could think MOS could them off. Simply because i see no one here as powerful enough to take him down. A fight similair to the one where he attacked zod in smallville is probably how this would go.

I think Kurse and Hulk are the biggest threats here, however Kurse can be decapitated with heat vision and hulk has limits to his own strength and durability.

From his Final Fight: Zod Fight

Note that this all takes place in a span of less than 1 hour, he shows no sign of physical pain, injury or fatigue throughout the time - except after destroying the world engine while already weakened.

Out of character and bloodlusted he could easily snap the opponents necks, BFR them like he did with Zod or use his heat vision offensively. Normally with morals on I could argue with the team but off - I don't see how they can handle all that speed, power and ferocity.

First of all its good to see so many people are very passionate about these movies. Sadly directors don't make these films with these kinds of threads in mind, only based on visual effects and shock and awe.

I see a battle going on between isaac_clarke and other debaters. Most of what is being discussed are the 'feats' displayed in the smallville battle. I think a better comparison would be superman vs zod's battle. Sure we should not discount the smallville skirmish but remember that it occurred the same day of superman's first appearance and probably first use of his full powers in a fight. We can assume he wasn't fighting at his best and it was probably the first time he threw a punch or ever had to take one. Also Faora and Non were extremely savage in their fighting -taking dirty shots wherever possible- and highly trained, this is probably why -in addition to it being his first time taking on enemies - he was at some points getting overwhelmed. Note that Thor has several hundred years of combat experience and Hulk has had his fair bit of punishment from the military before we see them in their respective movies.

The fight with Zod is more noteworthy, we see him at a higher potential and the fully scale of his abilities. The video is attached below:

Notice the amount of punishment he is able to handle here. I review them:

Now to clear up the world engine.

First of all notice superman is able to fly from continental USA to the South Indian ocean in a few minutes, displaying high rate of speed easily in excess of Mach 100. He destroys the world engine and is seen in metropolis again meer minutes - around 3 - after Lois and the colonel are given the go ahead to drop the payload. But i'm not here to argue travel speed.

The impact of the world engine in metropolis flattened skyscrapers like mush:

None of the avengers could withstand the amount of power that device was outputting. After all, it is heavily implied that a 30 000 feet drop would kill Thor and yes knock Hulk out UPON impact. Note that he fell as the hulk but WAS knocked out when he hit the ground, we know this because of wakes up as Bruce banner and the guard does say he saw him as a green and nude though awake. So he fell but stopped moving until he reverted back to Bruce banner. I'm not sure whether it is due to lack of durability or Bruce taking over, point being some level of impact is capable of reverting him back to Bruce. I again point out that Hulk was getting overwhelmed with a bombardment of a squad of chitauri's fire and Blomsky's grenade launchers in Incredible Hulk. Even he has his limits. I understand the Incredible Hulk is being brought up - really the Helicopter drop scene didn't make sense since he fell nearly human. However a drop from 1000 or so feet does not rival the near 30 000 feet fall in Avengers so you can't really make a case for him that way.

Kal is able to survive inside the epicenter of the world engine -which is adding mass to the earths crush from that point. Added to the fact that it was making more like Krypton, this lead to Kal being de-powered enough to begin coughing and lose control of his flight at certain points of his fight with the engine's defense system.

I'm not sure how long he was inside -over a minute probably - but flying up and destroying it in this state and in spite of the engine's displayed output is a feat which alone triumphs anything the marvel avengers have ever put out in term of durability.

In addition, he was able to escape the pull of a blackhole - I troll you not, that is what the collision of the phantom drives was meant to create - to save Lois after the plane crash despite it was warping him. This displays even further feats of durability.

So in conclusion he HAS the durability in this fight to outlast everyone in the match. I know people will bring up the smallville fight but given that his feats during Zod's battle display greater capabilities - and we assume he is even more well trained 1 year after - and the fact that despite the punishment he was being put through he was able to endure. These include: Being thrown inside the center of a Planet changing gravity well shown to easily demolish skyscrapers in the Metropolis while weakened by its effects, flying half way around the world in mere minutes - 5 minutes tops, thrown through dozens of building, punched up a skyscraper, enduring high speed close combat maneuvers, supercharged bull-rushing with the force to tear down a skyscraper, resisting the pull of a blackhole, reentry temperatures while being repeatedly punched, falls from orbit heights ALL in the span of about 1 hour without relenting or showing signs of physical pain...

Strength is a matter of spectacle because we don't see him use it to his fullest apart from the oil rig - but based on the other kryptonian's feat such as tossing train's several hundred meters away, we can say he is AT LEAST in Thor and Hulks mantle.

It is not a matter of DOES he has the durability, rather- how long would the others last before inevitably bow out.

It is sooo sick! Flawless gameplay and story and the dialogue is totally rich, greatest one liners in gaming history.

Special mention to aquaman, they really made him a true badass in this game.

@Floopay: Maybe you should post all that good stuff and feats in your own respect thread for seras...

@laflux: Can we get more info on this seras person?