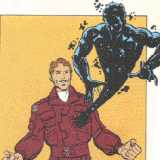 This is just a little note about how much I'm enjoying the whole quest system on Comic Vine.

I've been a lurker on the site for a few years.  I enjoy the chance to get updates on what is going on in the world(s) of comics, and learning about series/characters/stories I'm not familiar with.  But I always tend to go to the same sections of the site, and rarely go exploring.  I also tend not to be that social (at least around comics), so I haven't done much to interact with other comic vine users.

The Quests have been a fun encouragement for me to step out a bit, to explore parts of the site I've neglected.  Obviously it's just for fun, but it's just that little nudge I needed to step out of my normal routine.

So here's some appreciation for the Quests!  They've made me appreciate Comic Vine and it's fabulous creators and users even more than I did before!

So I'm really enjoying the whole quest idea.  It's fun encouragement for exploring all the great material on the site.  It's also making me think about some blogs I might want to write.  I've got an idea for a post about why I don't read comic books anymore, but still enjoy comic vine so much...maybe I can work on it once I've finished my finals!

Update:  I didn't really mean to post this to the general forums...clearly I'm still learning my way around the blog/forum aspects of the site!  I apologize for any inconvenience...

I have a list of my favorite smarties:
http://www.comicvine.com/myvine/dhu/smarties/75-6653/

I don't know who is actually smartest, but my favorites are:

Back in the day the Legion of Super-Heroes had a fantastically well-detailed headquarters.  They gave a full tour of the building in "Who's Who in the Legion of the Super-Heroes" in 1988; I loved it!  Here's the picture...my scanner wasn't big enough to get the whole thing.

Mr. Terrific and Oracle would be my choices.  Smart, experienced leaders, tough as nails and with very strong personalities, they could handle anything.  I'm not sure which should be President  vs. Vice President.  Whoever started as Vice President could become President next!

For what it's worth, I have a list called The Redeemed of folks I think would be great good guys, or who have already been redeemed in one way or another...

Highlights from the list.  Some of these folks have been redeemed in the past, but were "un-redeemed" for whatever reason...

For Marvel I would enjoy seeing:
Invisible Woman
Jean Gray

In DC I would go with:
Vixen
Donna Troy

For a crossover I would do:
Black Panther (Marvel)
Vixen (DC)

My ideal Avengers line up; looking at the list, it's amazing how many are dead or ruined!  Luckily, in comics it's always possible to bring folks back...

I would only use my powers in secret...the standard super hero is too flashy, draws too much attention...it would be best if no one even knew you had powers, or that anything was going on at all...you could get a lot more done, with a lot less hassle...

This is actually much harder for me than the Daredevil question...Most of Xavier's powers would be hard to use ethically (reading minds without permission, mind control)...but I think I would do it.  Astral projection would be cool, and you could be the world's best psychologist...