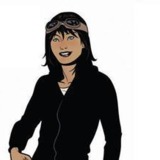 A big thing for me is that there should be a difference in price between digital and physical.

I love the Chilling Adventures of Sabrina, but it never comes out. I think it's been a year since the last issue. I'm excited about the Netflix series but I know next to nothing about it.

Chinese street food is awesome and I give it to them for range/quality. Most of the stuff you can get year round but in the winter roasted nuts, candied hawthorns, slow roasted bbq lamb. Then again China's a huge country so it varies very much by city. Probably very different food in Shanghai vs Beijing vs Harbin vs Chengdu. I don't remember ever seeing candied fruit in the south, only in the North.

Turkish street meat is probably the best I've ever had.

It had its ups and downs. The ups were great.

I love DKR and Year 1 but Moore's got V, Watchmen, Miracleman, From Hell and Swampthing.

Wolverine and Colossus. Come on you've got the little guy in taking the beating then the hot tag to the big guy who clears house. Plus, they've got a tag team finish "The Fast Ball Special." Talk about a tag team.

The more you look into this the more messed up it becomes.

I remember someone posting about Batman almost getting cancelled in the 1960's, which lead me to begin reading various books about comic history to piece together the likelihood of the statement. During my research I came across a lot of messed up stuff concerning early DC business (National Comics Publications, Inc., National Allied Publications, Inc. and Detective Comics, Inc. all seemed to have horrible practices). The only issue I had was that a lot of the statements ended up being uncorroborated. I'm very curious to see how well sourced this is going to end up being.

Fallout: New Vegas- It's difficult to pick which Fallout game was my favorite, but I figured New Vegas is the one I played the most. It was able to improve on the game play from 3, and while not as complex as 4 it felt less repetitive. I love 1 and 2 but that is through the eyes of nostalgia and not having gone back (I was pretty young when I played them). So, I'll go with NV.

Mass Effect 2- I felt this was the best of the trilogy. It was the most enjoyable, and had great characters.

Gun- I've played a few Westerns and this by far had the most captivating story. It may not have been as open world as Red Dead, but it was a lot more fun and zany.

Skyrim- It was a lot of fun. It may have gotten a little tedious with the whole "go here, get this, go here get that, talk to me advance the plot" mode of game play, but the depth of the world and multitude of the stories was incredible.

WWE- I don't know how I could pick a favorite one here. I'm a fan of wrestling culture (not so much the shows, though Lucha Underground is awesome) and generally each game has always gone well with the time (I haven't played them all). I love the create a wrestler option and have always focused more on the fantasy booking side of it. Whether it was creating my own fed or armchair booking old storylines, the WWE games have always been very fun. So let's see if I can get this down to 5

A recently retired, convalescing Jim Gordon, takes a trip to the shore for some much-deserved rest and relaxation. Soon after he registers at an old seaside resort, a body shows up and a murder-mystery is suddenly his to unravel!