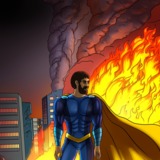 I'd love to see a Marvel/DC crossover, it can even be an animated film

6. Planet Of The Apes Trilogy

2. Guardians Of The Galaxy

3. X-Men Days of Future Past

4. Dawn of The Planet Of The Apes

Nam-EK can lift mjolnir or no ?

He can lift the ground Mjolnir is resting on, so technically yes he can.

Nam ek stomps Phase 1 Avengers. While learning to fly, Superman jumped very high and flew for a few seconds, he lost his concentration and fell back down to Earth and crashed through a mountain; only to be disappointed that he wasn't able to maintain his flight.

I mention this because both of them nearly died from a great fall back to the ground, while Superman fell from a similar high and was unharmed but disappointed from the impact. Nam ek has similar durability, strength and speed to MoS Superman and should stomp all of the Phase 1 Avengers because of this.

The only way possible for the Avengers to beat Nam ek is if there is a way to damage his armor and give him a sensory overload and make him disoriented, but if he adapts as quickly as Zod did then the Avengers would lose even worse.

Hela or a smarter more dangerous version of Ultron.

@truemoonchilde: Well maybe modern day Jean can, but classic Magneto, Jean couldn't solo unless he had his helmet off because he was too powerful. I am not current with the X-Men of today.

Also I agree about your statement of FF shouldn't be able to defeat Galactus.

Superman shouldn't be able to beak Darkseid but he consistently has in the past (although sometimes Darkseid is depicted as a JL villain ).

The X-Men shouldn't be able to beat Magneto or Apocalypse because of how powerful both of them are.