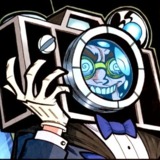 
Bring back the Shade, he deserves far better than limbo
Start the Conversation

I'm very happy , I mean REALLY ecstatic as all hell

Let's throw continuity out the goddahm window let DC have Lobster johnson be the new Batman, He could be a crazy, driven badass and I would be going nuts over it.

Well here's how I see it.

Armored ones have either a special compartment or can just hack the machine, some will just smash the machine to get money, I see many of them either having it on their dresser at home because when your fighting crime you probably won't need a twenty. Some like the Question might have it in a special pocket. Guys like Batman of course have the ol' utility belt , other might just keep it in their boots. Some of the ladies might keep it in their bras like some friends of mine do. And  the one true original in the group would be Deadpool because he would probably keep his wallet hidden in his ass, cuz let's face it would you try to take it from their?

Flying heroes don't need a cape for anything but aesthetic quality, such as with Superman. But you don't see Wonder Woman with a cape or how  about oh I don't know....THE ENTIRE GREEN LANTERN CORPS. Thousands of protectors all of them fly but hmmmm, I don't really remember any of them having capes. Why, because if the Incredibles taught us anything it's that capes are more trouble than they are worth.

The Moon Knight of course who else, He's got like 3 or 4 different ones and each and every one of 'em could be great alter egos. taxi driver, millionaire, merc, this guy probably  has a few tucked away for a rainy for all we know

Now that i think about it

Nighttime if at all. You can really use the dark to your advantage at night look at batman I mean come on, if he was his costume during the day everyone wouldn't be afraid of him, they would laugh their asses off then shoot him in his mouth hole or maybe not, the shadow obscure and distort your perceptions.