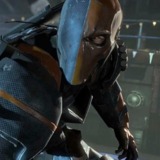 The Destruction of the Death Star was an Inside Job

Sorry for the inconvenience but my internet is messed up and I can not create an actual review so Im just posting my review here until I can actually move it to the review section.

So to start off this episode was... Amazing... Beautiful... Godlike.... Excellent... Tied for the best... Utterly awesome... And just plain Deathstroke19 like. If I could rate it i would give it 20/5 Stars but I cant so yeah.... Seriously though it was a great episode and here are my original thoughts in it from about the 20 minute mark.

Slade Wilson from the CW's Arrow has come to Starling City... And its AWESOME!! So in the episode Oliver was injected with rat poison to keep his blood from thickening but it has a side affect of hallucinations. Oliver believes he is hallucinating Slade and Shado in Starling but Barry Allen does a blood test and his blood is clean. Right before the test is complete Slade attacks Oliver in his "Arrowcave" and is beating the crap out of him and yelling at him about Shado's Death when he suddenly disappears. Then Diggle tells Oliver how after he came back from Afghanistan that he saw ghosts of people he lost there and maybe that's all Slade was but.... My theory is that Shado is a ghost and Oliver finally puts his mind at peace with that and believes the hallucinations are over and then in the final scene we see Slade standing in the background or he confronts Oliver and shows that he is real.

Well that theory was wrong and here's what ended up happening:

-Roy is injected with the SSS.

-SLADE WILSON IS ALIVE AND IS THE MASTERMIND BEHIND THE WHOLE BROTHER BLOOD THING AND IS PLOTTING TO DESTROY EVERYTHING OLIVER LOVES AND THEN SHOOT AN ARROW THROUGH HIS EYE!!!! HES ALSO BARING THE CLASSIC SLADE GOATEE WITH AN EYE PATCH!!!!!! HOLY SON OF A B*TCH!!!

-Oliver has his mask now.

- Not a single mention of Malcolm or the League which is the only thing sort of bad about this episode.

The Flash part was my live reaction to it so that's why it's formatted like that lol. Any of those that saw my live response would know that as soon as I saw Slade in a "hallucination" on a roof top I knew it wasn't a hallucination... So it shows that my Deathstroke Detecter was working.

So yes overall a great episode and was very fun to watch and highly recommended. Maybe even one of the best episodes yet.

So what are your guys' thoughts on the episode? Slade's return? Flash? The mask? And what do you think their planning for the continuation in January?

What if Durge survived?

Note: This is Durge from the Star Wars universe.

What do you think would happen if Durge somehow survived being thrown into the star? What would he do first? Would he quit being a bounty hunter (probably not)? Would he plot his revenge against Anakin? Would he just go back to his bounty hunting business? What would he do after any of the above stated? How would he react to the Galactic Empire? What are your general thoughts?

Arrow Blog 1: Has she slept with everyone?

Before I start I would just lik to say I am going to be trying to make a blog series about the CW's Arrow. Also, this is only my second blog so please let me know how it goes.

Alright so what I’m going to be talking about is how Moira Queen has slept with every [large role] masculine character her age or has had him wanting too (Walter). Now I’m only a teen so I don’t know if there is some unseen beauty in Moira that just gets the guys going or what but tell me what you think.

Here’s a picture of Moira in case you need to jog your memory:

To me she looks like a dish… a duck and a fish. But don’t get me wrong she obviously knows how to preserve her youth especially considering all the stress she has been through but hey what do I know because like I stated before I’m only a teen.

I mean think about it in chronological order it has gone Robert Queen, Malcolm Merlyn, and Walter Steele. Is there even one character that’s in her age range that she hasn’t slept with?

Also, I liked the plot twist with Malcolm being Thea’s father but I just hope it doesn’t set the show on a path and turn it into a soap opera. I can just picture it now a repeat of One Life to Live…

*shivers* Ugh... I’d rather not have my Grandma watch my "action” show with me. I mean seriously somehow Slade will end up being Oliver's dad if this trend continues.

Oliver Queen: "I didn't realize you wanted to sleep with my mother, Walter."

It's ok Oliver everyone does and you may want to be careful because she might come for you next...

Oh and yes I was cracking up when malcolm said that because this was all I could think of:

Sincerely and with Thanks,

Note: This is my first blog and it's not suppose to be professional at all. I'm in school so I'm just writing a quick blog about this.

Alright before I begin I just want to say that even though I am a HUGE Star Wars fan I have never played any of the Star Wars: Force Unleashed games, however last night I started the first one... It was hilarious. I was around the first or second level with Starkiller and there was a huge amount of stormtroopers in this area and none of them could hit me or the rogues with their blasters, just like in the movies. I thought it was so funny and then when one of the stormtroopers finally hit me he shouted "I ACTUALLY HIT HIM!" Lol it was like he knew he sucked and was so happy when he finally did something his his gun. Unfortunately I threw an explosive canister at him right after that and he died a fiery, painful death. So yeah I just wanted to share that with you guys because I thought it was just a classic LOL moment.

Also, did anyone else think the Darth Vader mission at the very beginning was hilarious? I basically just hit the force push button the whole time and it was slamming the Wookies into trees and boulders bringing the whole map down. Then if there was one left I would just force choke it to death and then lift up its dead body and throw it off the cliff.

Oh, and I also noticed that after playing through three missions (including the Vader one) they have yet to say Starkiller's real name, or even say Starkiller. So yeah... Just thought I'd point that out as well.

Blogs Created:
5 blogs
Most Commented blog:
The Destruction of the Death Star was an Inside Job
Total Comments on blogs:
118 comments