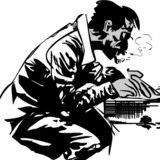 Beliefs and Values: Gabriel doesn't know what to believe. He's been a scientist all his life, so he knows to believe in that, but at the same time, he has no idea where to go in his life. He seems pulled towards a complete desire to control and overpower, but this power of his seems to be overpowering himself, driving him to do things he doesn't know will result in. He suffers from periodic black outs where he'll wake up not understanding anything. Little does he know, a second Gabriel exists, who desires nothing more than power beyond all else. He will conquer and overpower the rest of the world until he is the ruler of everything.

Obsessions: the Other Gabriel is obsessed with power and desires nothing more than to rule.

Super Power Origin: a mixture of religion and science

Powers/Mutation: Gabriel's power is more than even the good side realizes exists. He has the power to both visualize and manipulate the electromagnetic spectrum. He sees the world in its entirety. He can use the electromagnetic spectrum to control radar and see all around him. He can see the pulses being emitted all around him. And with this vision, comes control. He can bend the electromagnetic spectrum to his will. He can tap into cellphones and other wireless signals, hack into electronic devices, generate an electrical current in thin air over 20 meters away from himself, and unlike most superpowered people, he doesn't even need to move to do it. Sure, sometimes gesturing and pointing can help his mind concentrate, but if he really wanted, he could be nothing more than a head in a jar and do the things he does.

Because everything can conduct electricity if you push enough into it, Gabriel can even magnetically command the earth itself. His most common method of travel is to magnetically charge his steel vest and use it to suspend himself in the air. He can even use the heat from generating electricity and turn use it to melt and mold metal and other substances. He can induce electrolysis on surround water and turn it to gas. However, heat can be a problem. His one major weakness, is that of heat and fire. He can't control fire. he can't push it away, or extinguish it without heavy efforts. Fire gets past all his defences for the most part.

Even with his powers, he'd be nothing if he didn't know how to use them. Simple bullets and metal weapons are useless against him, as he can quickly take control over them. Sufficient strength has been known to overpower him on occassion, and since an organic body is too complex to simply flood with electricity in order to magnetically repel, he's forced to go for a simple electrocution to try and stop them. However he's found several heavy hitters who've had skin too tough to simply electrocute.

Another strength Gabriel has, is that sense he can visual and manipulate the electromagnetic spectrum, he can find himself quite immune to radiation. Since he can simply dissipate the stuff. He does have a limitation in that he cannot convert waves to other waves, as that is too much even for him, but he can command the waves, and since almost all forms of electromagnetic waves exist around us at any given time, this isn't usually a problem.

Occupation(s): currently on the run for back robberies

Education: 3 Doctorates, one in Theoretical physics, one in electrical engineering, and one in West African religion.

Identity: tried to be kept secret, but he is currently staying low due to being wanted for armed robbery

Gabriel was born in Maine to Charles and Maryland Jimerson along with his younger brother Joshua. His father was an unemployed drunk who focused much of his rage and hatred onto Gabriel. Gabriel was a natural genius, and his father resented him for it, especially since his father dropped out of high school and never was able to get a job beyond construction work until he threw his back. He pays the bills with disability checks and treats the whole family like shit.

Gabriel grew up fearing his father. The way his father could just take control of his life in a single moment, remove all agency and leave him broken, it did break him beyond his bones. And when Gabriel was 12 years old, an old wooden telephone pole dropped right into their house, killing his father.

Gabriel became a brilliant young man and graduated High school at the age of 16. He moved on to college to get multiple doctorates, while his younger brother grew up to become an insurance salesman.

But Gabriel was never whole again after his childhood. The fear of loosing control of his life to someone else made him a very confrontational person. He was insubordinate and very aggressive towards his superiors. One day, when he was 24 years old, he took a trip to Africa to do a seminar, where he uncovered a tribe that claimed to be able to speak with the earth. He never believed them of course, but curiosity and his ego made him become interested in learning more about it.

As he learned more though, he found that this tribe, and a few others like them, were actually doing something much more phenomenal that talking to rocks and trees. They were visualising the Electromagnetic spectrum. To them, the spectrum was a beautiful ocean of colour that told them the emotions of the earth. Gabriel quit his job teaching and began to devote the next 3 years getting a third doctorate in studying the religion of these people and others like them.

Eventually, Gabriel learned how to access the Electromagnetic spectrum, unfortunately, he never should have. The people learn to do this through meditation, synchronising the electromagnetism of their own brain waves with the surrounding electromagnetism And Gabriel was not mentally sound. The surging electromagnetism, pushing so much untapped power into his being, pushed him to a breaking point. He stopped even trying to restrain his desire for power, and his fear of disempowerment. He became Doctor Neuron

Weapons/inventions: he'll occassion create metal disks that he can use as buzzsaws and shields, but he tends to prefer electricity.