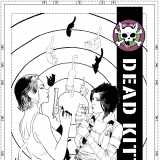 Warning:  Semi shameless self promotion ahead.

This is the story of a girl, haunted by the ghosts of a serial killers victims, and driven to find out who she was before they took her memories.

Follow the production of the comic from beginning of issue 1 to submission.